We hope you’re busy exploring, dominating, surviving and building. Hopefully you also enjoy the unique, craft-able in-game armor Conan Exiles has to offer. There is a massive amount of armor combinations possible even without taking dyes into consideration.

We thought it would be interesting to share some insight on how an armor set in Conan Exiles is created.
We sat down with one of our character artists who has almost single-handedly created every armor from concept art to finished in game asset up until Frozen North and beyond. She was kind enough to share her process of creating the Lemurian Royal Gown with us so we can share it with you!

Creative Director Joel Bylos typically starts the process with a brief such as: “We need a medium armor for the Vanir Faction, that’s used in the North and made with leather and fur. You’ll get it around level 40.” The brief on the Lemurian Royal gown was more involved and would probably fit a whole blog post on its own 😉

After the brief, the artist needs to detail and narrow down what cultural influences they should reference, if it’s light, medium or heavy armor and how hard it is to get. Which crafting materials are used, what mood should it evoke and what environment the players are supposed to use it in.

All this information is needed to start reference gathering and to come up with initial concept sketches. The artist will then bounce back ideas with Gavin, our art director and get more pointers from Joel about Lore and properly grounding it in the Conan IP. This last part is especially important throughout the whole process. 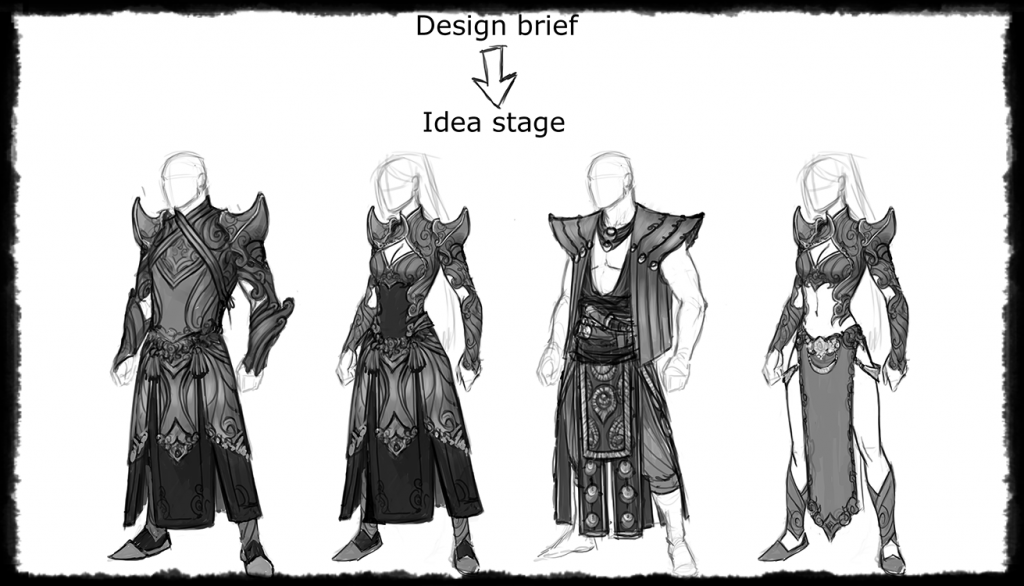 At this point, the team has to to take additional requirements into consideration. An armor set consists of five different pieces which need to work both independently but also in combination with armor sets already in the game. The armor should have a good silhouette, so it’s easily recognized from the distance and it should appeal to a specific type of player and their unique play-style. A player that likes to play with daggers and high stamina might prefer a thief looking armor while another player might prefer a two hander and a heavier looking armor.

The team always tries to find a “hook” or a special unique feature for each design. Something that makes a set memorable and particularly interesting. Some of those examples are the antlers on the “Vanir” Medium Headband; the hard to miss “nipple plates” of the “Derketo” Set or the luxuriousness of the “Lemurian Royal Gown”. The worst thing that can happen is to have bland and forgettable designs for crafting. 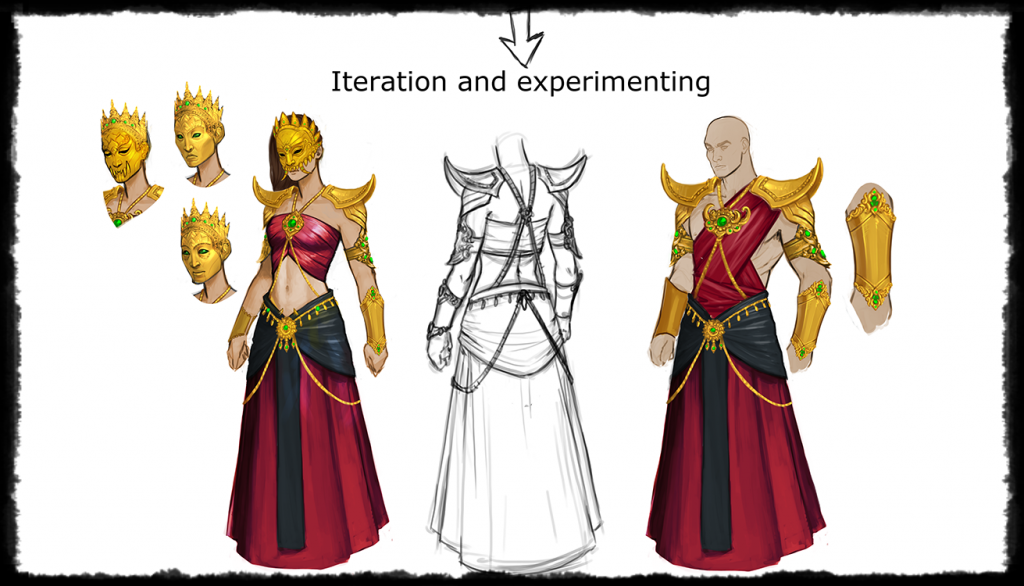 We don’t want to play it safe here or chicken out on interesting, wild or unconventional ideas. The important aspect is to account for widely varying player tastes, making sure that everyone can find something they like to wear. One single armor doesn’t necessarily have to appeal as a whole.

There are also quite a few design constraints the artists must keep in mind. Production time, known technical restrictions, poly-count, engine materials and character movement are only a few. Last but certainly not least, the default color scheme of the armor must work with the dye system.

This whole process can take from one, up to three to five days. Some concepts click into place faster than others. Once Art Director and Creative Director approve on a final concept it moves into production. 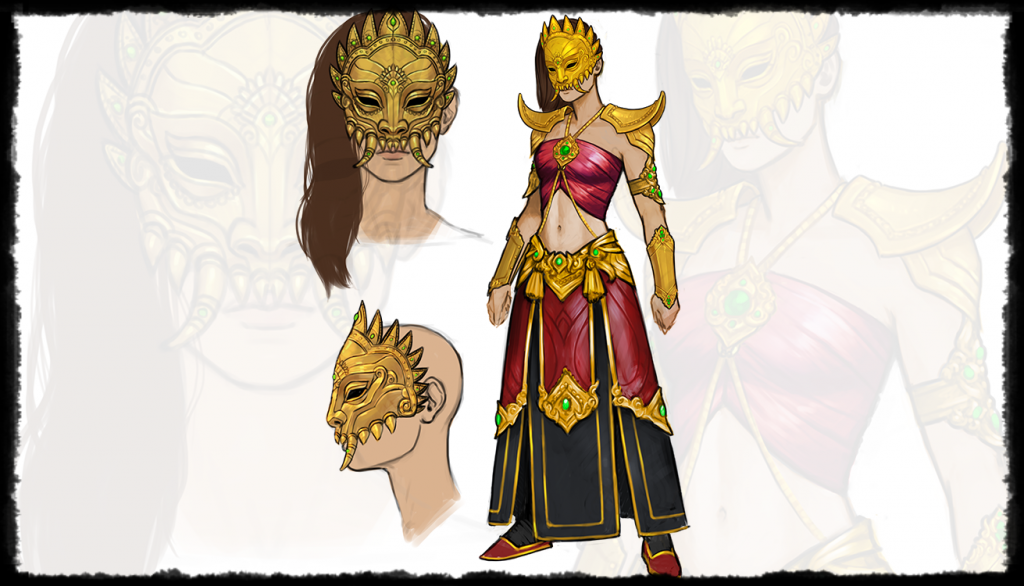 From here, the concept is passed on to a modeler. However, in most cases, the same artist who created the concept, also creates the model. The silhouette and major elements get blocked out first. After that, the artist needs to figure out armor slot cutoff/connection points and she has to refine the model.

The first version of the armor model is very detailed and can go as high as over 30million polygons (for comparison, the full in-game character model is around 50k polygons). The high polygon modelling process usually takes five to seven days on an armor set of average complexity. 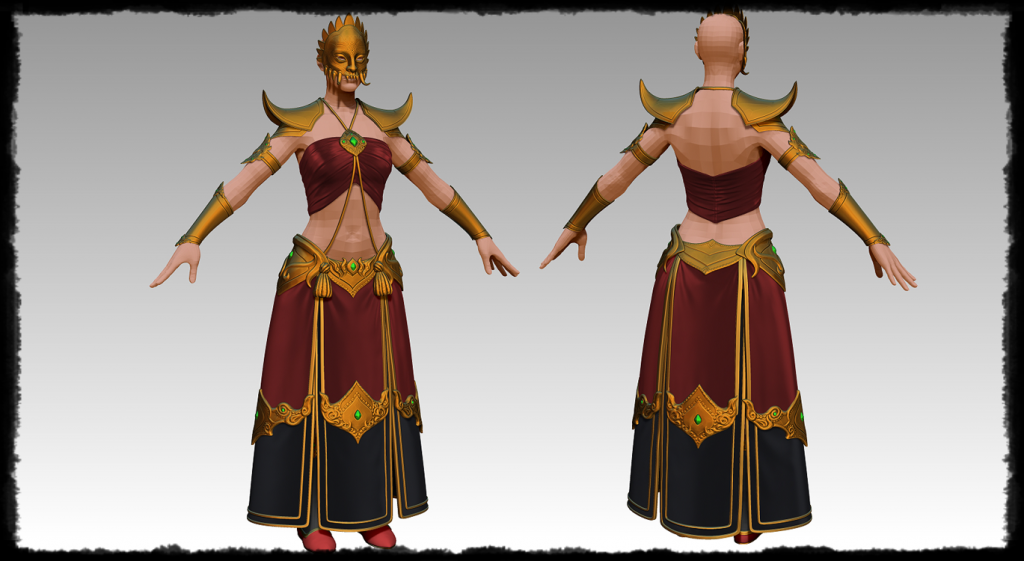 The second version of the armor model is an optimized iteration for actual in-game use, which gets texture mapped. Textures are referenced from the high-resolution version and then translated into the low polygon game model. It’s important to preserve the detail of the high polygon version. 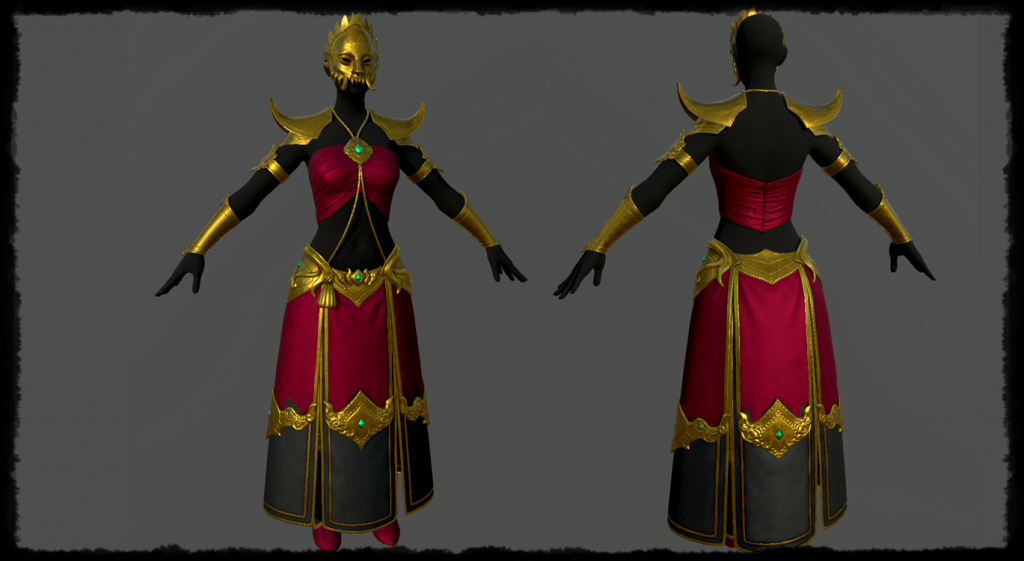 In general, the male armor is made first and the female armor is then being modified to account for female body shape. Sometimes, however, the design asks for a completely unique model for the female counter part. In this case, production time can easily be doubled!

In the high-poly phase we use a special tool to emulate sewing clothing out of real fabric in 3D. In the final implementation phase we configure in-game cloth physics. This process helps us create realistic physics and movement for the different type of clothing. 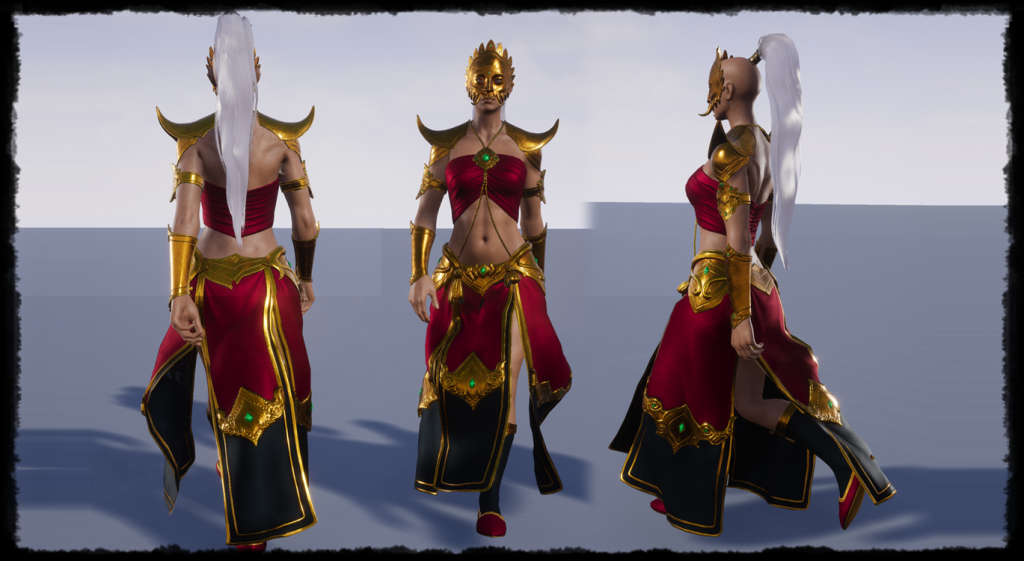 The model parts are assembled together and grouped to match armor slots. The result is then skinned to the character skeleton, so it flows naturally with character movement. Cloth physics get set up (which is often a bit lot of trial and error process) and exported into the Unreal 4 engine. Voila, new shiny armor for you to enjoy.

The whole modeling and implementation stage usually takes 10-15 days total for our full-time artists and her two junior artists.

What is your favorite armor and dye combination? Show us your favorite in-game outfit and tag your screenshot with #conanexilesfashion on social media. You never know, we might just pick it and use it for one of our upcoming community spotlight streams! 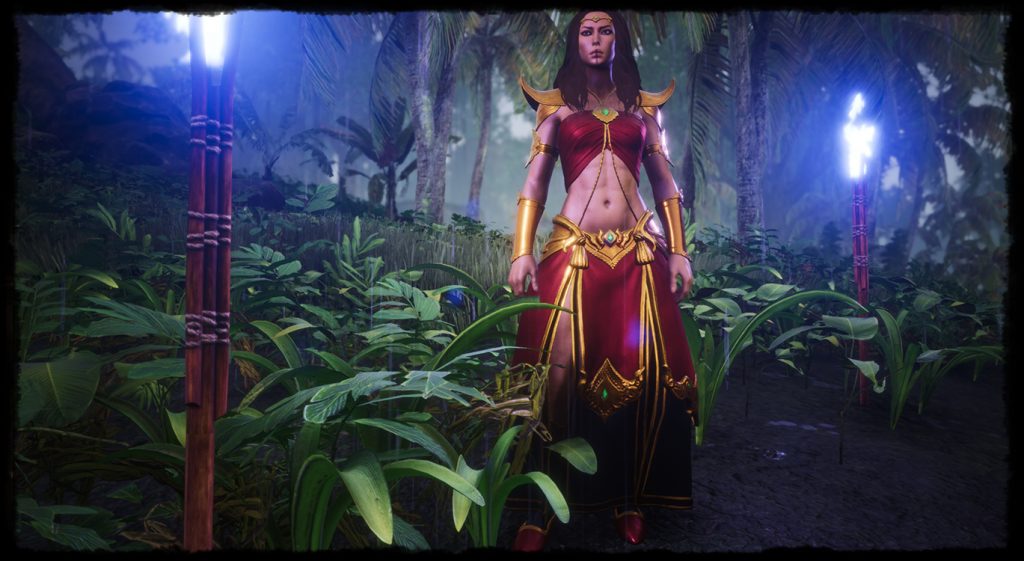