With the release of The Frozen North, and there are major changes to the game itself, across the board. I believe the accumulation of these changes, along with the updates we’ve made since launch, provides a new and different Conan Exiles than the game we launched at the beginning of Early Access.

Today we also released a video that gives an overview of some of the changes and additions we’ve done to the game since Early Access started and what’s coming in The Frozen North:

We’ve done a complete content rebalance across the entire game.

Camps have been revamped with the new AI. They are now more dangerous than they ever were before, with Faction Enemies now matching the difficulty implied by their location and weapon setup.

We found a bug with our stat system that was making creatures have incorrect statistics for their level and that has been corrected. It makes the monsters do more damage and take more damage to kill.

In order to compensate for the changes, we’ve added presets to single-player, which allow you to choose your difficulty at the beginning of the game. These are civilized (easy), decadent (normal) and barbaric (hard) and they provide different sets of presets that allow you to jump straight into the game.

You can still choose custom and modify dozens of settings to make the game experience uniquely your own.

We’ve added facial hair to character creation. You can choose among several different styles of facial hair (males only, sorry) and change the color separately to the hair color.

The Exiles Journey is a new UI and content that we have added to the game to provide slightly more guidance to players who might be unfamiliar with survival games and who are looking for a little more direction during their play.

When you perform certain actions in the game, your journey will update and you will receive a small amount of experience.

It serves as a hybrid of tutorial and achievement system – players can either check the journey to see their next logical step in the game and completionists can spend time filling in the entire journey.

Currently, the journey only continues through five chapters, but we will expand and update it throughout the rest of development.

Combat has been tweaked and changed with this update. I’ve gone into detail about combat timings, control feel and animation canceling in some of the live streams, but this is an area that requires a lot of testing and tweaking. If you find your eyes glazing over – feel free to skip ahead to the next section.

Separated Heavy and Light Attacks – We’ve removed the paradigm of holding down a light attack to power a heavy attack. There are several reasons for this: it caused responsiveness problems with the controls as they were continually trying to determine whether the player was attempting a light or heavy attack, it limited our flexibility in having different animations in light and heavy attacks as the heavy attacks always had to be framed exactly the same as the light attacks in the start window and finally it felt like an odd way to play with a controller.

This gives us the ability to separate animations on light and heavy attacks and makes light attacks more responsive. Heavy attacks have a minimum time to use, as well as a maximum hold time which means that positioning and defending are more important during combat.

The separation of heavy and light attacks paves the way for us to add a more intuitive combo system to combat which will allow for expression of player skill.

Secondary attacks on 2-H weapons and shield blocks have been moved to a new key mapping.

Removed Sprinting in Combat – Controversial as it may be, we’ve disabled the ability to sprint with weapons out. This will hopefully alleviate what we internally call “lag jousting” – people sprinting and using mouse turning to maintain full speed while swinging. It boosts the use cases for dodge.

In facilitating the sprint change, we’ve made changes to the way that sprint works. If you sprint in combat now, you will automatically sheathe your weapons. There is also a wield/unwield button that can be used to swiftly move between combat and non-combat modes.

We’ve also created separate sprint and dodge keys. This allows you to be certain that you will never accidentally sheathe your weapons in combat. If you prefer the old behavior, you can still assign a key to dodge/sprint.

Dodging and Blocking – We’ve added new dodging animations to game. These will change depending on the type of armor that you are wearing. This includes the stamina cost of dodging. Dodges will now cancel any combat animation at any point and also include some immunity frames (frames where you will take no damage at all).

Dodge is a defensive measure. You cannot dodge forward into combat, but only sideways and away from combat. We will be adding charges and other special attack types at a later date, but we wanted to be clear about the separation of defensive and aggressive maneuvers.

Blocking has also been changed. Using block now cancels recovery time on your attack animations. We’ve added proper block stagger animations to mid-sized and small creatures which should make shields more useful against wildlife. We’ve also upped the durability of all shields. Currently block is overpowered as a defensive mechanic. We will be introducing shieldbreak moves to the combat system.

We will be making larger changes to this mechanic later on in development, but for now our aim has been to make shields useful enough to be worth bringing with you on your adventures. 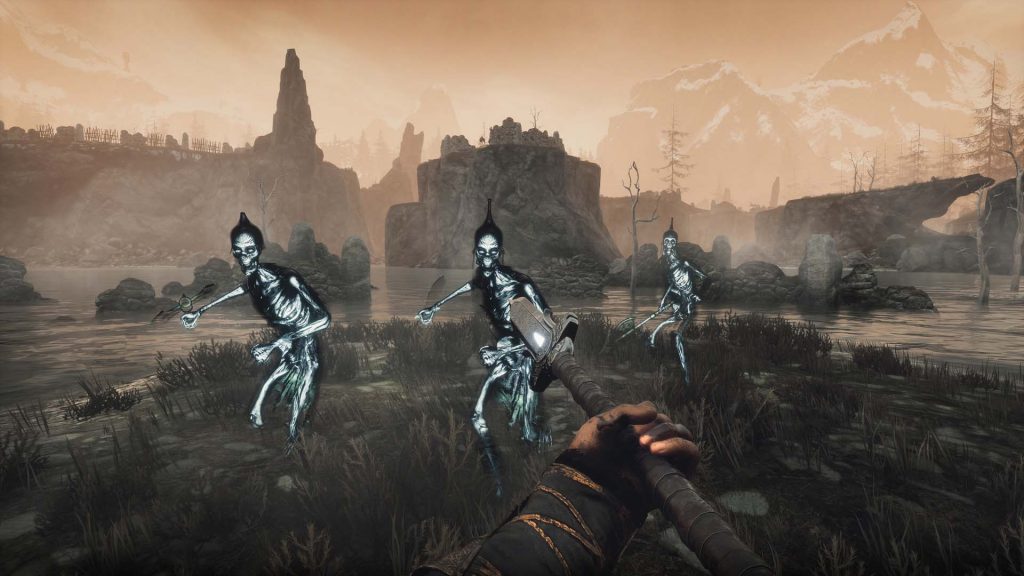 Following directly into the thread on combat, is the changes that we have made to the Artificial Intelligence in the game. Since launch, we’ve seen clearly that the AI was not performing as we had hoped and we’ve been working with an external partner to rework the core of the AI systems in the game.

With this update, we’ll be releasing the first update to this system on all of the humanoids in the game. Our focus has been on getting the core of the AI into a solid state, and building upon that base.

Human NPCs are now much more of a challenge and in groups they will be very difficult. Thralls have received the same AI treatment, making them more accurate, more relentless and, yes, able to move down stairs.

As we add combos and new weapons for players, you’ll find that NPCs also start to use those abilities in combat.

We’ll continue to revamp the Artificial Intelligence and we’re hoping to start on the monsters in the game next, adding similar changes to the core intelligence and giving them a more robust animation and attack set.

And of course, all of that will eventually lead to the release of The Purge feature.

With the release on consoles and the changes we have made to combat, we’ve also done a pass on the controls of the game.

As mentioned above, we’ve revamped the controls for light attack, heavy attack, secondary attack, block, dodge and sprint. All of these new functions can be remapped.

We’ve also made keyboard/controller shortcuts available in the UI for the game, allowing faster access to many options in the inventory, crafting and feat window.

We’re in the process of implementing a new feat window which reorganizes the feats based on their utility. This should simplify the feat window for both PC and Consoles.

The temperature system has been added to the game. You’ll see a new icon on the HUD that shows the current temperature as your character is experiencing it. It’s important to mention that the temperature gauge will change as it is affected by the various clothing and food items that you consume.

Being too cold applies the following debuffs:

You may notice other physical effects from being exposed to freezing weather.

Being too warm applies the following debuffs:

Items and placeables have a role to play in the temperature system as well. Different armor sets have different levels of temperature adjustment – fur armor will make you warmer, light cloth armors will keep you cooler.

Open flames (such as torches, braziers, campfires etc.) will also effect the temperature of players. Be careful about placing too many fires close together, you might overheat!

We’ve been paying close attention to your feedback the past 6 months and we’ve made various changes to our official server settings in order to accommodate the wishes and requests of the community.

After the server wipe on the 16th, when the servers come back up you will find that you now have five choices:

PvP Fast – Increased Progression. Buildings can only be destroyed during a time window each day.

PvP Normal – Regular Progression. Buildings can only be destroyed during a time window each day.

PvP Mayhem – Fast Progression. Full Building destruction at any time of the day.

PvE Fast – Increased Progression. Buildings and other players can never be attacked.

PvE Normal – Regular Progression. Buildings and other players can never be attacked.

You can discover the exact details of each server by selecting it in the server list in-game and reading the information on the right.

We’ve reduced maximum clan size on official servers to 10. This is inline with the reduced server capacity from Early Access launch (70 reduced to 40) and over the coming months we hope to increase the server capacity and then we will consider increasing the clan size again. Private servers can still control clan size as they will.

Finally, we have made changes to ownership on objects in the game. Objects that make sense are no longer locked – that is to say machines, chairs, beds, campfires etc.

One of the most consistent pieces of feedback we have received since launch has been regarding exploits and people using them to create unfair situations within the game.

We’ve devoted a significant amount of development time to tracking down and removing exploits over the last 6 month. We set up a special team internally, and created our external Exploit Hunters program to track down and remove as many exploits as possible, together with you, the community.

It’d be premature to say that battle is won, but we have patched and removed dozens of exploits from the game and we feel that the experience is more stable than ever.

This is not a comprehensive list of all the hundreds of changes that have been made to the game. But it is a taste of how much the core game, completely outside of the addition of the Frozen North has changed.

We’re not done yet and we’re aware that we have a lot left to finish. With the Frozen North, we hope you find hundreds of hours of content to explore. With the changes to the core game, we hope that your experience of that content is enjoyable and fun.

Remember you can check out www.conanexiles.com/updates for a quick overview of the updates we’ve made to the game since start of Early Access.

Our philosophy in Early Access is to deliver you a fantastic game by launch, in early 2018.

But the road is long and the journey hard. Along the way, we’ve been attacked by monsters and bandits and we’re battered, but we’re also halfway there.

The grand adventure continues, Exiles. Thanks for sharing it with us. 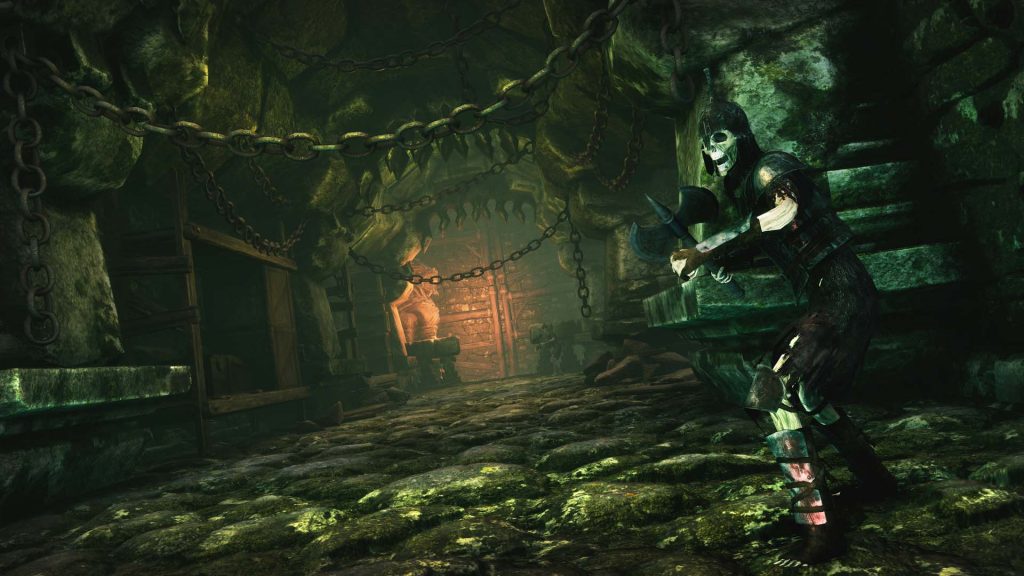