Battle Pass and Bazaar Full Overview in Age of Sorcery

In Age of Sorcery, we’re upgrading the way we release both free and paid content. We are committed to developing Conan Exiles for ages to come, and with our system of Ages and Battle Passes, we can craft more evenly paced free content updates with an easier way for all of you to support the game’s growth and receive exclusive cosmetics.

After the update, you will find three new tabs on the far right of the tab menu: Challenges, Battle Pass, and Bazaar. Today, we will go through these and hopefully answer any questions or concerns on your mind. 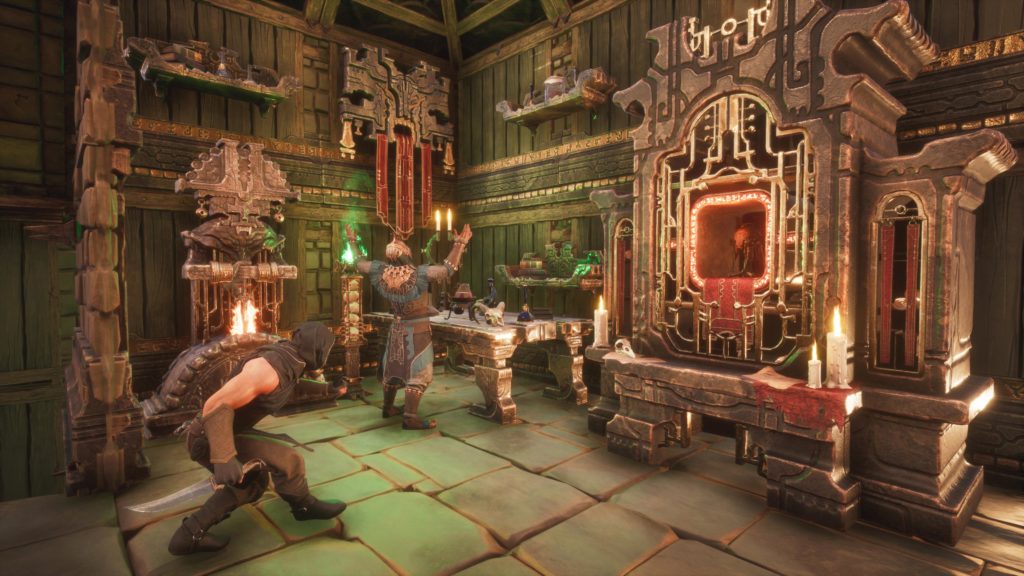 First, a brief explanation of how the Battle Pass works. Whether you purchase it or not, you can progress through 60 levels by completing Challenges (more on those later). Each level has a reward tied to it, and while some of these levels are free, most are available through the paid Battle Pass.

If you don’t have the Battle Pass but progress through it for the free parts, then decide to buy it later, you will still receive all the rewards up to that level at once. In other words, awards apply retroactively.

Before we get into the contents of the Battle Pass and Bazaar, let’s quickly talk about what’s not in it. It was clear from the outset that we would not sell anything that gives power. Essentially, the new Battle Pass replaces the previous DLC system but remains tied to cosmetics.

That means that any weapons or armor you see in the Battle Pass rewards will give you the recipe to craft it, not the weapon itself, and will have a base game equivalent in terms of stats.

You will also be able to use these weapons and armor to apply its looks to other gear through the illusion system, a new feature in the Age of Sorcery Update. This lets you apply one piece of gear’s look to another of the same category. There are also no experience boosts or anything that gives you an advantage in PvP. 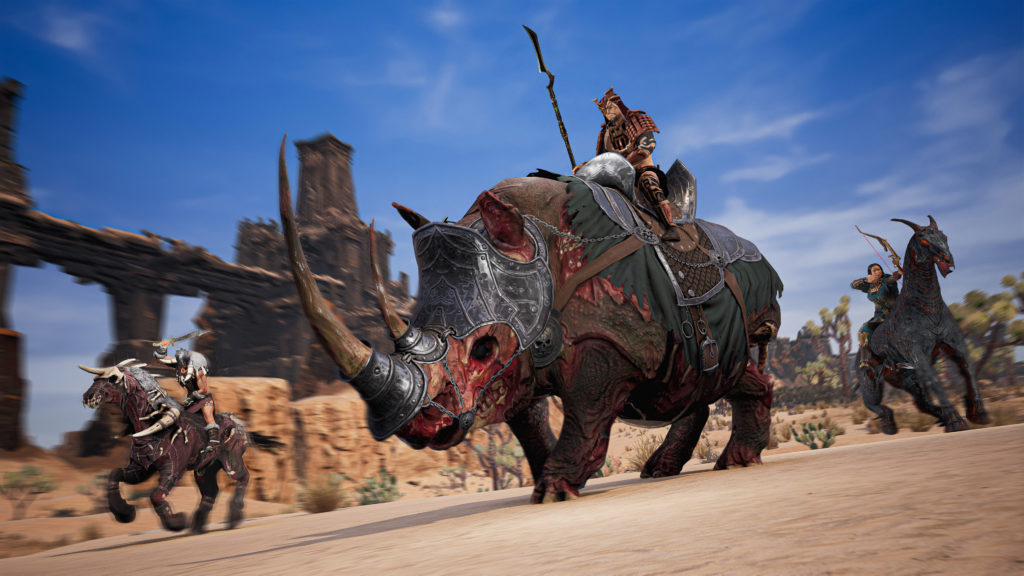 The Age of Sorcery Battle Pass also includes a bunch of free items. A new type of item that you can get from the free part of the Battle Pass is spell flasks. These are 5-stack one-use items that let you cast one of the new sorcery spells, such as lava floe or invisibility.

We believe these serve as a nice introduction to the mechanics of the new sorceries without the need to become a sorcerer, and everything that entails. They also shouldn’t disrupt multiplayer because they can only be earned and used once.

As mentioned, the Battle Pass includes only cosmetics (and the one-use flasks). Here’s a full list of the categories of items in the first one, but these will change for future ones:

Most of these are in some way themed around sorcery, such as the rune-carved building pieces, colored wall torches, or sorcerer’s armor. The mounts are no ordinary steeds, as they all bear the vile mark of undeath. 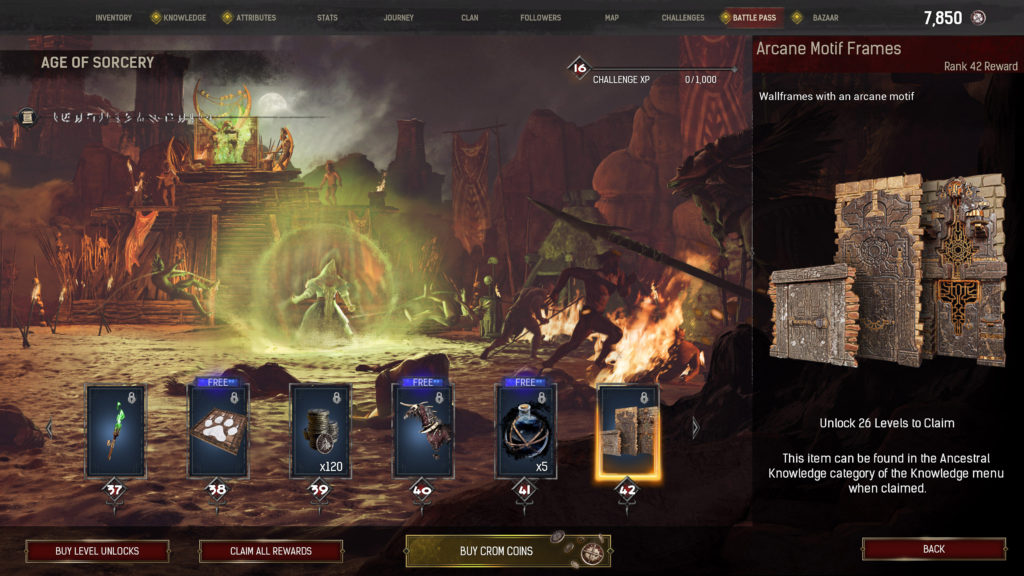 We wanted the Battle Pass to be a part of the world and narrative, so with each Battle Pass page that you progress through (paid or not), you will discover the dark beginnings of Sorcery in the Exiled Lands.

Crom Coins can also be used in the next new tab on the menu: The Bazaar. Here, you will be able to purchase cosmetics in smaller bundles or individually. For example, perhaps you want building pieces but not weapons. The Bazaar lets you pick only what you want.

There are a limited number of items in the Bazaar that rotate over time. We’ll have a pool of items that rotate in based on demand. 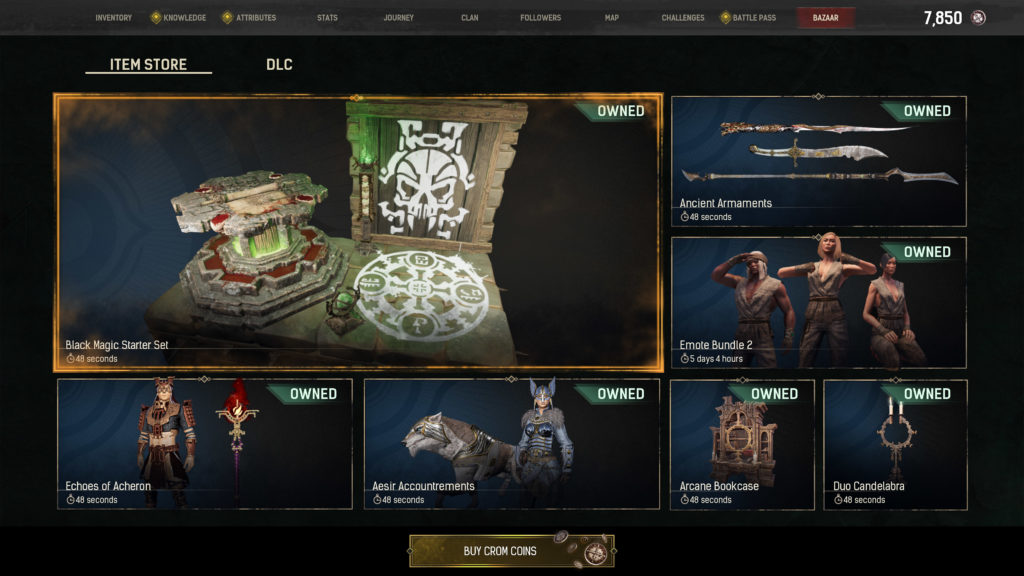 When a new Age begins and the Battle Pass resets, you will no longer be able to earn the items you did not progress to, but we may rotate modified versions of them into the Bazaar at a future time, and we will be closely monitoring community feedback on this aspect.

You level up your Battle Pass by completing Challenges. These are five rotating objectives that each give a certain amount of XP when you complete them. When you finish one, it’s replaced by a random new one, without any limits, so you can level the Battle Pass for as long as you want.

Every day, you’ll receive five Challenge XP multipliers, which stack up to a total of 25, so if you don’t play for about four days, you’ll still get them. Each time you complete a Challenge, a multiplier is used up, giving your next Challenge a significantly larger XP reward.

If you come across a Challenge you don’t like, you can reroll your set of five. There are three rerolls which reset every 24 hours. 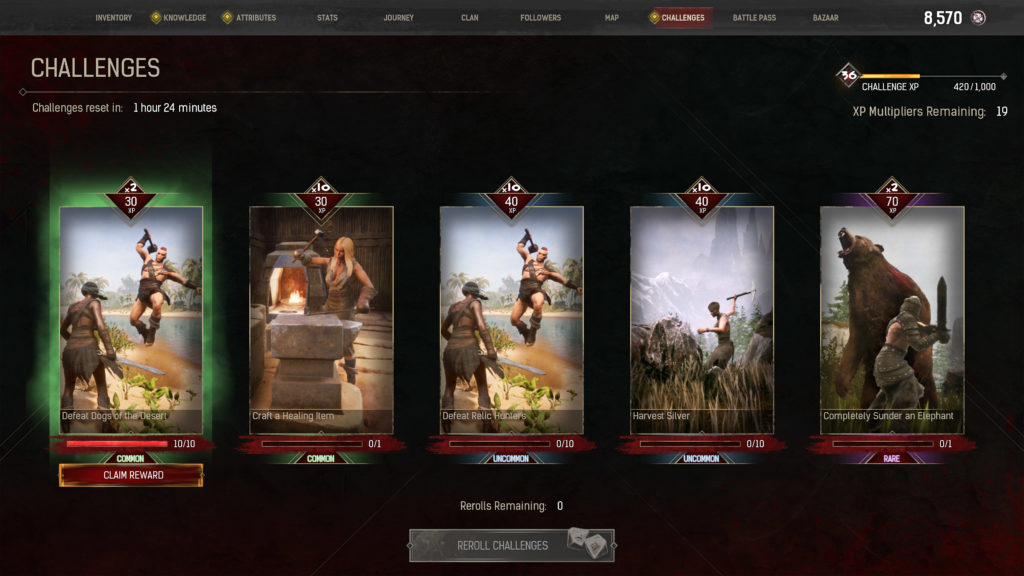 The Challenges range among several varied tasks, from killing a certain type of enemy to collecting materials, and more. Our goal with them is that you shouldn’t need to go out of your way to complete most of them, making you naturally level as you play the game.

Each Battle Pass will last for about 13 weeks. We have seen the concerns about how long it takes to fully complete, and our goal has been to balance it to a satisfying pace.

In practice, that means that if you play at least one hour on two separate occasions every week, you should be able to complete the entire Battle Pass before the next one comes along. If you play a single two-hour session, you may still finish it, but will need to complete some of the more difficult challenges. This is an estimate but gives a good impression of the pace.

The progression is also linear, meaning that it will not get harder to level the further you get.

A New Age for Conan Exiles

The Battle Pass is only one aspect of a larger change, which is Ages. Each Age will be split into chapters, with each chapter being a major free content update.

The Battle Passes and Bazaar allow us to release major content without a price tag, meaning we don’t need to split players between expansions. It means we can create an evolving world where the playing field remains equal.

We hope this has clarified everything for all of you. As always, we will continue to monitor feedback. We’ve included a lot of details in this text, so keep in mind that numbers and details may be tweaked before launch. 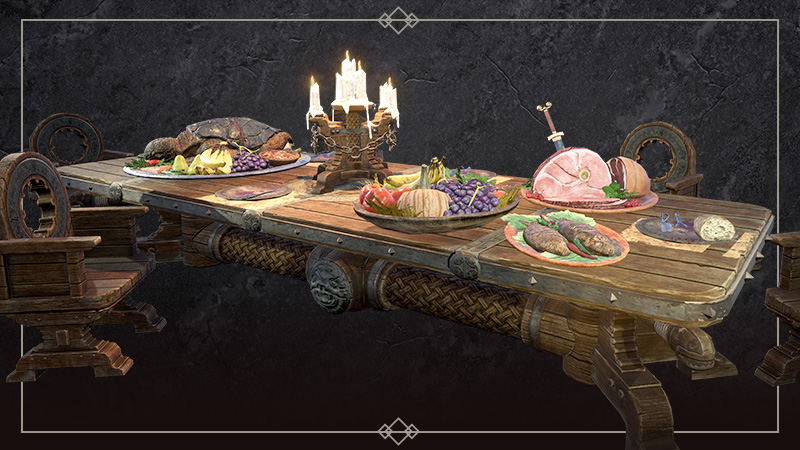