The world of Conan Exiles is brutal and harsh. To survive and thrive you must conquer the world around you and dominate the landscape. Dangerous creatures or aggressive players will be out to hunt you down and few places will be safe.

Building a strong base is crucial for your survival. But to truly defend what is yours you need watchful guards who do not sleep, helpful artisans who do not tire and devoted priests who know the deep secrets of their gods. For this purpose, you want to raid camps of NPCs, knock them out and drag them back to your base. There you can break their will on your wheel of pain and make them your loyal thralls.

A world full of enemies

The Exiled Lands have become the home of many peoples. Most of them have formed factions which lay claim to vital parts of the land. It is among these groups you must capture your thralls.

The most unorganized and poorly equipped are camps of exiles which live near the great southern river. These poor souls will often not even have weapons and will be the easiest to capture, but their power as thralls will also be limited.

A bit further north, into the arid and rocky landscape above the river, you find the Darfari cannibals. These Yog worshippers are quite well equipped, but their weapons are mostly primitive.

The Black Hand, a band of exiled pirates, lay claim to most of the lands to the east. Their capital is a massive rock formation which they have shaped and decorated into a huge landlocked pirate ship. This dangerous group includes a host of nationalities and most of their number wield fearsome weapons.

To the north, below the highlands and tall mountains, you will find the brutal Dogs of the Desert. These bandits are strong and feral, with a hidden secret which you must discover.

The strongest faction in the Exiled Lands are the Relic hunters. They have built a large and sprawling city to the north west. They dig for powerful artifacts and ancient secrets in the cursed ruins of the area. Their city is well defended with well trained and equipped guards. 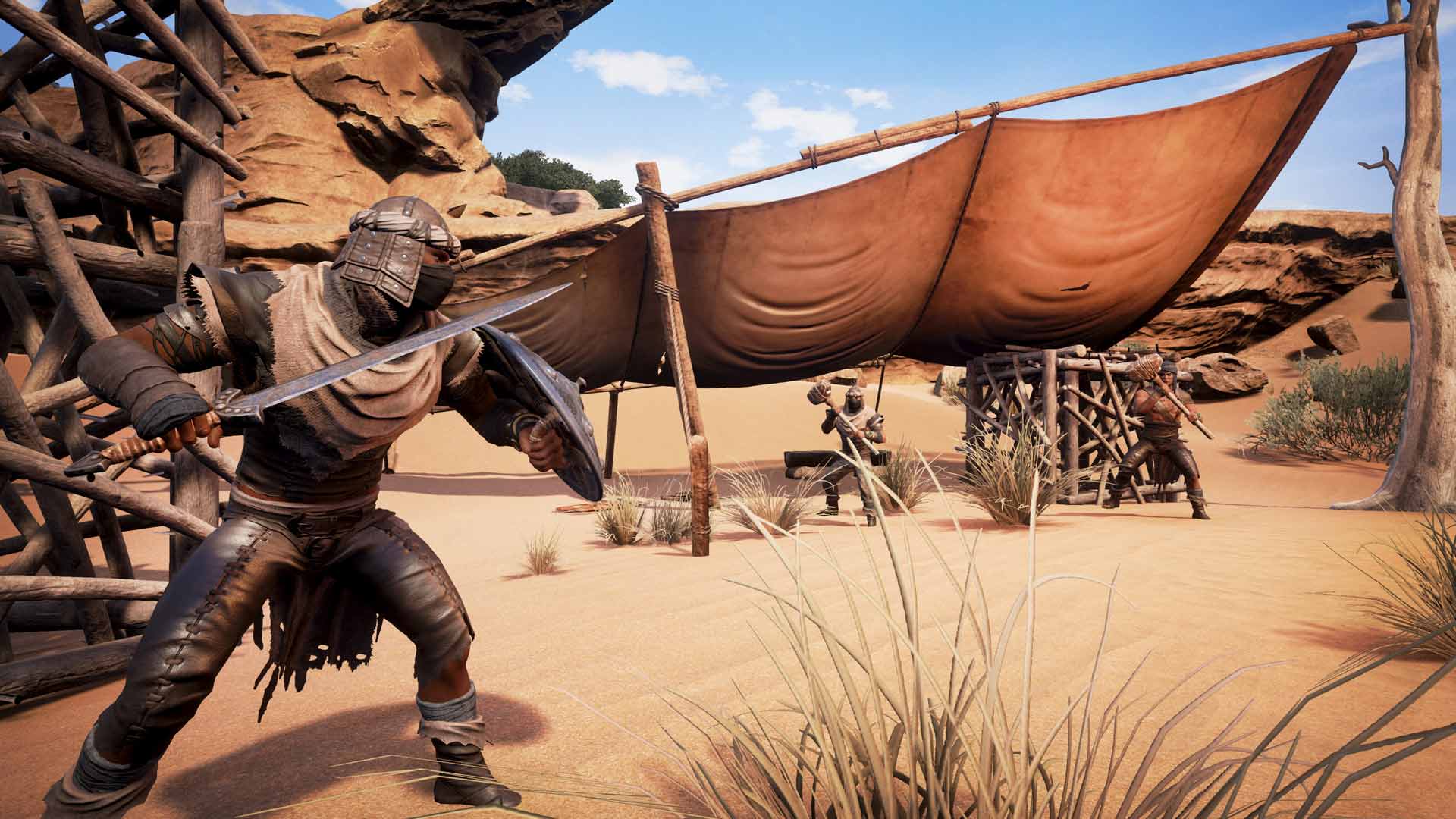 A host at your command

To capture thralls you need to attack these groups and knock out the ones you are after. You can knock out an NPC using a truncheon and drag him back to your base by tying a rope around his legs. Place your captives in your wheel of pain to turn them into your thralls. You will need to feed them during this process, and gruel made from seeds is the most cost effective way.

Each NPC will have a role, like archer, performer, fighter, cook, armorer, blacksmith, overseer or many more. They also come in different qualities, some of which are novice, skilled, master, adept or legendary. The higher the quality of the NPC, the harder it will be to capture and the longer it will take to break their will on the wheel of pain.

Each of the factions in the Exiled Lands will not have all of the professions, so you may need to go on long scouting expeditions to find the ones you are after. Most of the factions also consist of varied nationalities from the world of Conan, such as Stygians, Cimmerians, Nordheimers or Shemites. Some nationalities excel at specific task – Shemites are excellent archers for example, while Cimmerians are great blacksmiths.

To defend your base you will need archers and fighters. Place your archers high up on towers and walls to shoot approaching enemies or dangerous wildlife from a distance. Fighters are good guards to place inside your settlement, behind strong walls, as they will rush forward and attack any opponent within range.

Artisan thralls are equally important because you can use them to improve your industry. Each artisan can be attached to a crafting station or machine. Depending on their quality, thralls such as cooks, smelters or blacksmiths may speed up your production, or reduce the amount of resources needed. The highest quality artisans also unlock brand new and improved recipes for items, such as exceptional or flawless weapons.

If you delve into dark caves and hunt in ancient ruins, it is crucial to also have performer thralls which can remove corruption. The corrupting magic which permeates such places will also corrupt you, permanently weakening your body, until you can find rest and pleasure to soothe your soul.

The most important thralls of all may be the priests though. You will need to have captured an arch priest and placed him at your altar before you can summon the avatar of that religion. You can find priests of Yog among the Darfari cannibals, priests of Set among the Stygian relic hunters and the priests of Mitra live with their followers at special temples erected in their god’s honor.

Owning a host of thralls can be the key to your survival in and dominance of the Exiled Lands, but you must also guard your captives carefully. Enemies who raid your camp can knock out your thralls, drag them away and keep them as their own.

The Exiled lands are a brutal and harsh place – only the ruthless will survive. 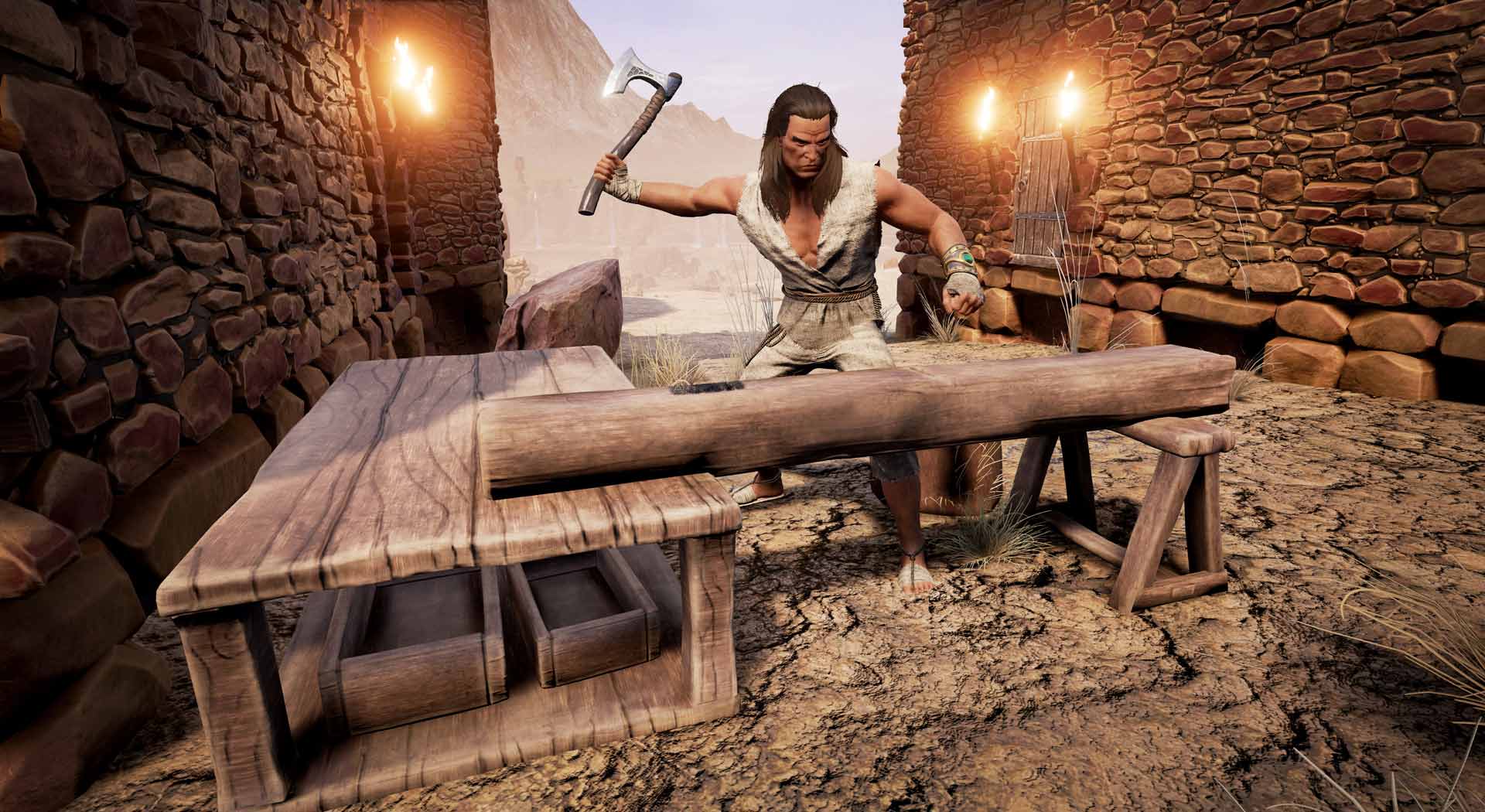