The Early Access journey is coming to an end with less than one month left until launch. Big changes and great amounts of new content are coming to Conan Exiles as we are getting close to May 8th.

The game world is increasing in size, new features and systems are being introduced, hundreds of new items are being added and there is an all new and brutal combat system for you to enjoy!

In short, when the game launches it will be much bigger, much better and much deeper.

The new combat system is very different and a huge improvement on the old one. A specialized team of some of our most veteran designers and animators have spent months working on just this new system and finally Conan Exiles will have the brutal, tactical and savage combat which a Conan game deserves.

The first thing you might notice is the new visual style. All weapons (swords, daggers, hammers, maces, spears, great swords etc) are getting their own attacks and animations. The attacks consist of a wide range of lunges, sweeps, jumps, cleaves, slashes and dashes. This makes combat much more fluid and interesting with a host of different attacks to perform.

With a host of new attacks, effects and weapons the new tactical possibilities of combat have been greatly increased.  Dash in with daggers and add stacks of bleed, before using the unique dagger backflip to escape enemy retaliation. Sweep away groups of enemies with powerful cleaves of your great sword and cripple their movement so they can’t run away. 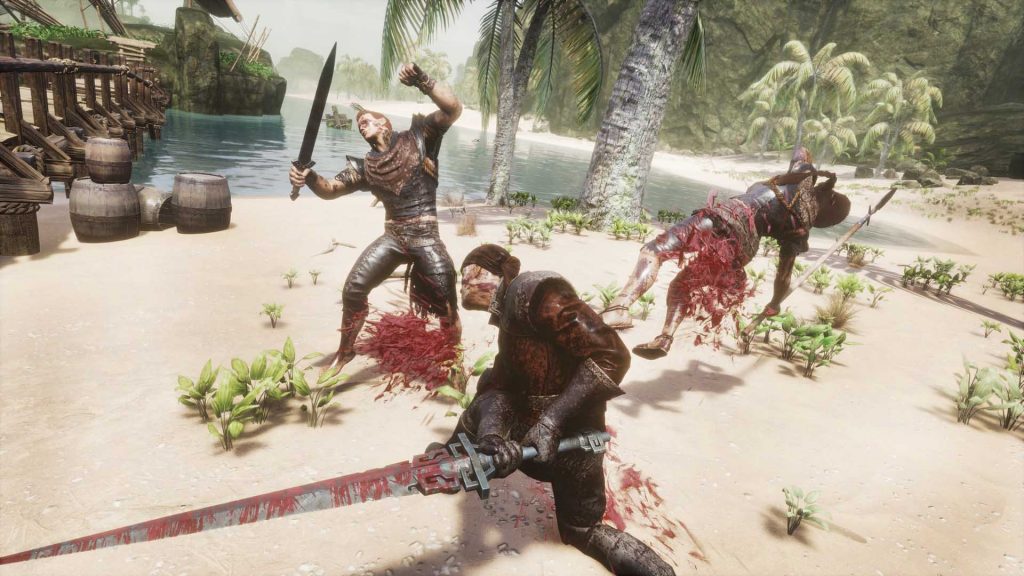 With launch comes two new areas and the map is being greatly expanded.

Above The Frozen North you can see a mighty volcano, still quite active with rivers of lava running down its slopes. If you climb into the volcano you find powerful new resources like obsidian plus a strange cult worshipping an ancient power.

There are ruins in the volcano and you find a ominous light emanating from the Well of Skelos. Drop down the well and find yourself in a dangerous dungeon. In it you can use a roaring forge where obsidian weapons can be created. The dungeon is searing hot and an ancient secret lurks within. Brave the challenges ahead to get your hands on powerful new gear. The volcano and its dungeon has been balanced for max level characters.

Follow the big river east and you will find the swamp. This huge new area offers deep jungles, wet marshes and a sunny coastline filled with pirates. You can build well-protected castles or even entire cities up in the massive trees of the swamp.

There are many new monsters to fight in the swamp and lots of places to explore, from the Pagoda of Boundless Lusts to Jamilia’s Liberty, a massive beached ship which the Black Hand pirates have made their home. There is also the Forgotten City of Xel-ha, the ruins of an ancient Lemurian city being devoured by the encroaching jungle and the Palace of the Witch Queen dungeon. The swamp has been made for characters between level 20 and 40.

With these new areas the size of the game map has been greatly increased and with the addition of The Frozen North last fall the overall size of the map has more than doubled since the start of Early Access. 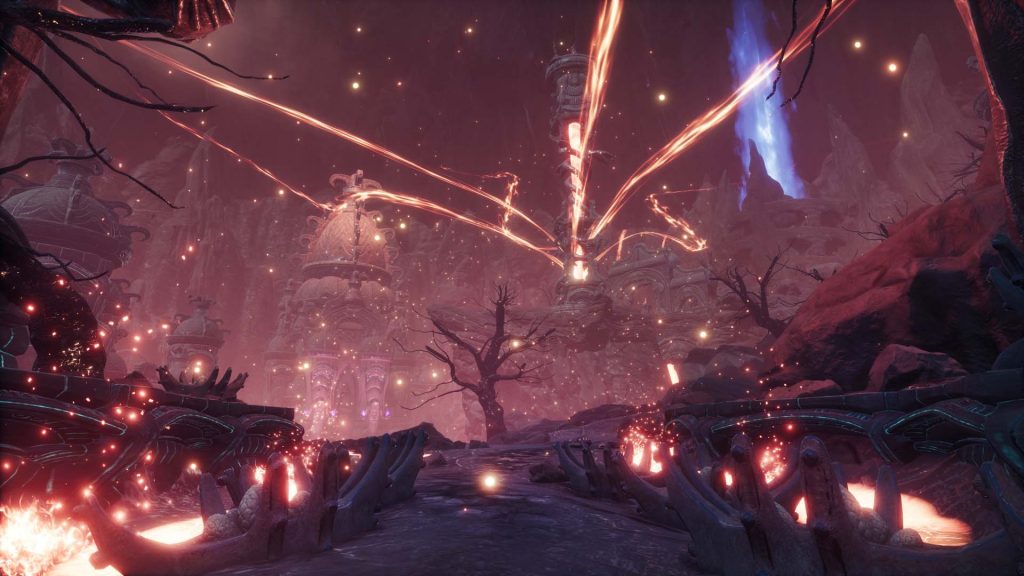 You fight for dominance over the Exiled Lands and control the landscape with the castles and cities you can build. With the purge the environment fights back to drive you from the land. You must ready your defenses as groups of frost giants, locusts, undead, relic hunters, gorillas or any of the many other groups of creatures or exiles in the area will attack your base. The type of purge attacking your castle depends on where you have built it.

The purge does not happen in the southern-most areas of the Exiled Lands, so the first humble homes you build near the great river will not be attacked. You have a purge meter which fills up depending on your activities as you play. The longer you play, the more you build or kill the faster your purge meter will increase.

When a purge is about to happen, you will get clear notifications and you can also see on your map exactly where the NPCs are attacking. They will attack in waves and continue hitting your buildings if no thralls or players are fighting back.

This new feature adds extra depth to the game, especially for those who like to play on PVE servers or play single-player. You must now build your castles with defense against creatures in mind, and having some archer thralls for defense will be more valuable than ever.

If you are afraid that hordes of creatures will destroy your hard-earned base, you do not need to worry. The purge can be completely turned off on private servers or in single-player games, and all the purge’s settings can be tweaked, such as strength, duration, number of waves, how quickly the purge meter fills and much more.

In certain strong purges the NPCs may wield new legendary weapons – defeat them and claim the weapons as your own! 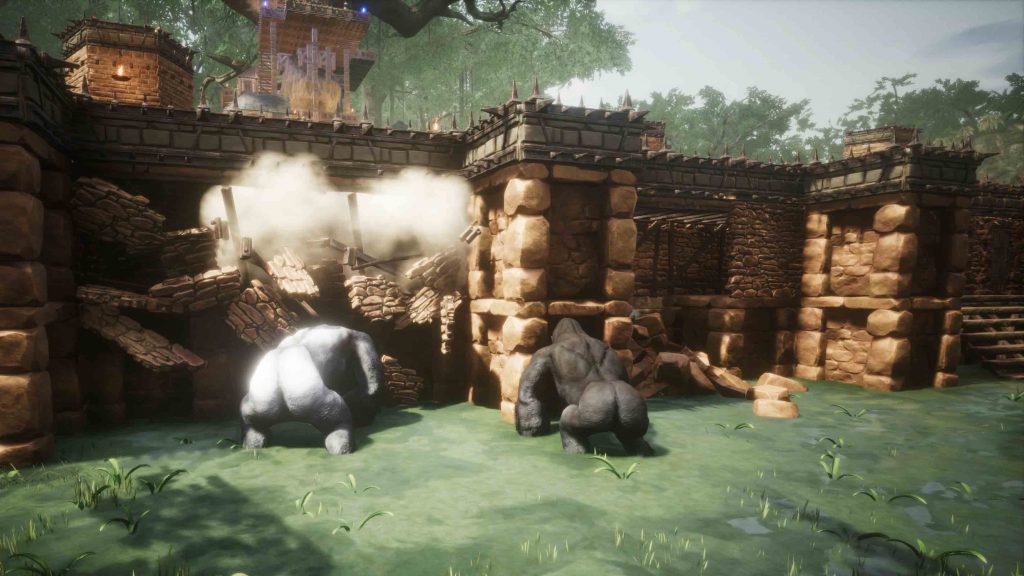 The attributes system is also getting an important revamp. For every ten increases in each attribute you get a unique perk which unlocks a special ability. Ten points in survival allows you to eat uncooked meat without getting sick, fifty points in agility lets you perform a double jump while in the air and forty points in strength makes all your heavy attacks do 25% more damage. This new system makes developing your character and choosing the stats you want much more important.

Along with this system comes the introduction of many new armor sets which also increase your attributes. These are armors from the various cultures from the world of Conan the Barbarian, like Stygian, Hyrkanian, Zingaran and Hyperborean. The further you increase each attribute the more expensive it becomes. Getting those extra bonus points from pieces of armor can be just enough to get you that awesome perk.

In addition, you can also make warpaints which add to a chosen attribute. You can only wear one warpaint at a time, but with the combined bonuses of warpaints and armors you can now make specific builds which allow you to possess the perks you are after.

Altogether there are hundreds of new pieces of gear to choose from, with all new weapon sets, epic armors and tools. There is also a host of new legendary weapons with their own unique bonuses. You can get your hands on most of these through the all new world boss system, where massive world bosses can be defeated for their legendary loot. 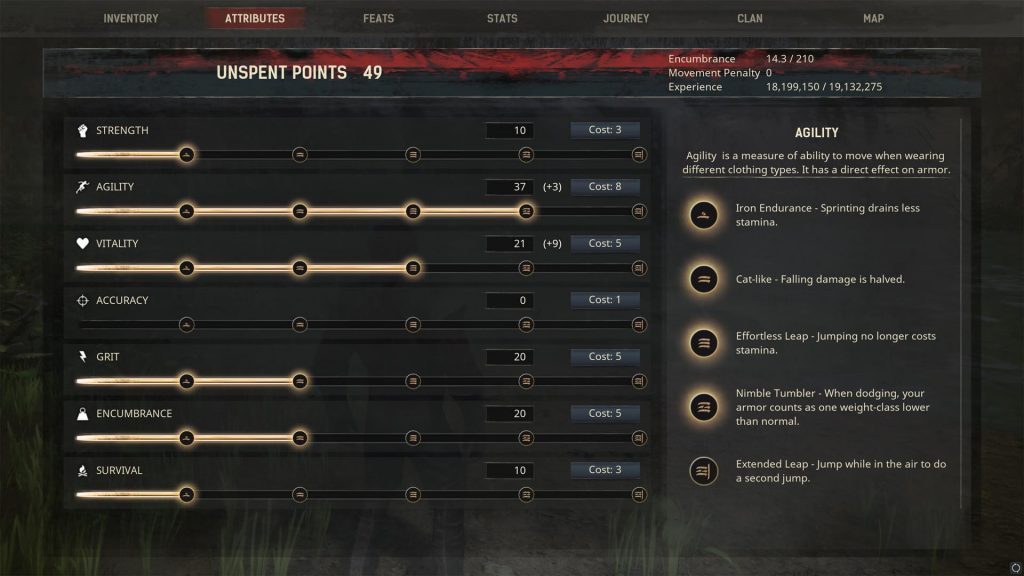 A major change is that players no longer heal over time as they play Conan Exiles. This can of course make many battles much harder as it is no longer possible to just run away, automatically heal up and then just return to the action.

Now you must eat food or drink potions to regain your health and all healing is done over time. Luckily there are so many types of food to eat in the game, from simple cooked meat to honeyglazed roast for example. This makes gathering resources for food and alchemy extremely important as you won’t last long in the wilderness without something to eat to regain your health.

We have introduced farming to make it a bit easier to get your hands on many of these resources. You can now build planters in your base which allow you to grow different kinds of crops, like lotus flowers used in potions or for example hops, leavening or highland berries.

For launch we are adding an all new religion to Conan Exiles. Derketo is the goddess of both fertility and death. Her dual nature makes her avatar a sight to behold, as one half of its body is rotted away while the other is that of a beautiful woman.

With world map greatly increasing in size it can take quite some time to travel from one region to another. To make this process easier we are introducing the map room which you can build in your own settlement. It is shaped like a map of the Exiled Lands and is quite large and detailed. As you explore the world you will discover monoliths which you can attune to your bracelet. Once attuned you can teleport to that monolith from your map room. There is no easy way back, apart from dying and respawning on your bed, but with the map room you will at least be able to quickly travel to remote places in the Exiled Lands.

In addition to all the new features and content coming to Conan Exiles we have also done a major content rebalance. We have changed the areas where creatures spawn and how they behave in the world. You won’t see large groups of random monsters just wandering the map like before, instead they have more specialized habitats and act more naturally in the world. You may notice that only the red shalebacks attack you on sight, as they are the more aggressive males or that when you are in an area infested with spiders you will see their nests and webs along the cliffsides.

The rebalance has also been done to feats, crafting ingredients, where you find resources and crafting recipes. It has been done to make the game deeper and more interesting in all phases. So if you are a returning player you will see that a whole host of little changes have been made.

These are some of the new things you can look forward to as we are nearing launch, we hope you will enjoy them. 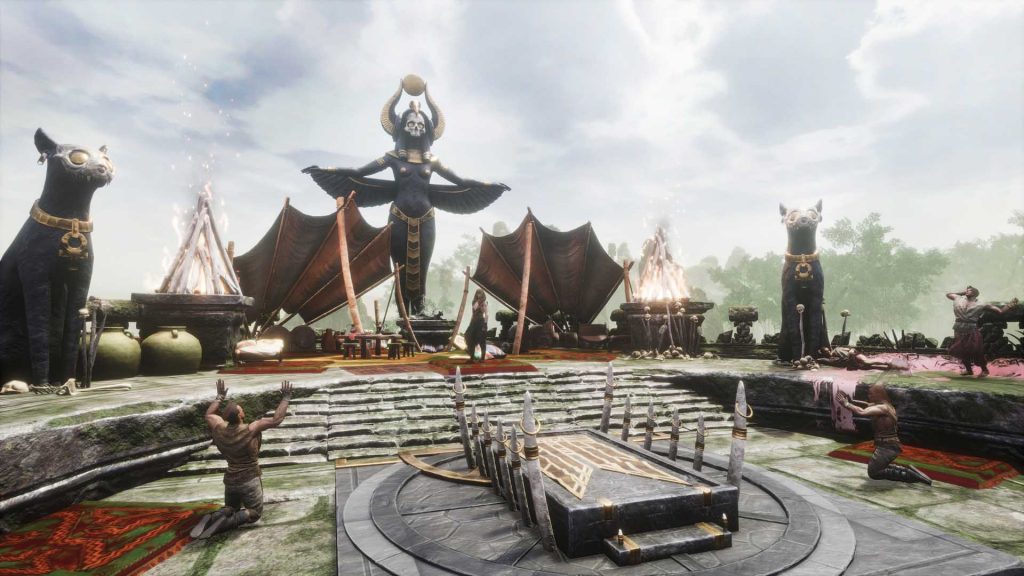