A look at things to come

Conan Exiles has been a massive success for Funcom, selling over 480 000 copies in the first 30 days, and staying as #1 on Steam’s Global Top Seller list for over two weeks. We really couldn’t have done it without our fantastic community of fans and players giving us feedback, providing us with some much needed bug reports, and telling us what you’d like to see in the game. Thank you for all you’ve done for us.

Today we’re offering a more detailed look at some of the things to come in our upcoming content updates, slated for release very soon. We’re also going to shed some light on our roadmap plans for Conan Exiles. A significant amount of money is being put into Conan Exiles in order to make it the best game we can. Our coders are hard at work squishing bugs and disabling exploits while our artists and designers are creating new content in the form of dungeons, gameplay mechanics, in-game items and biomes. 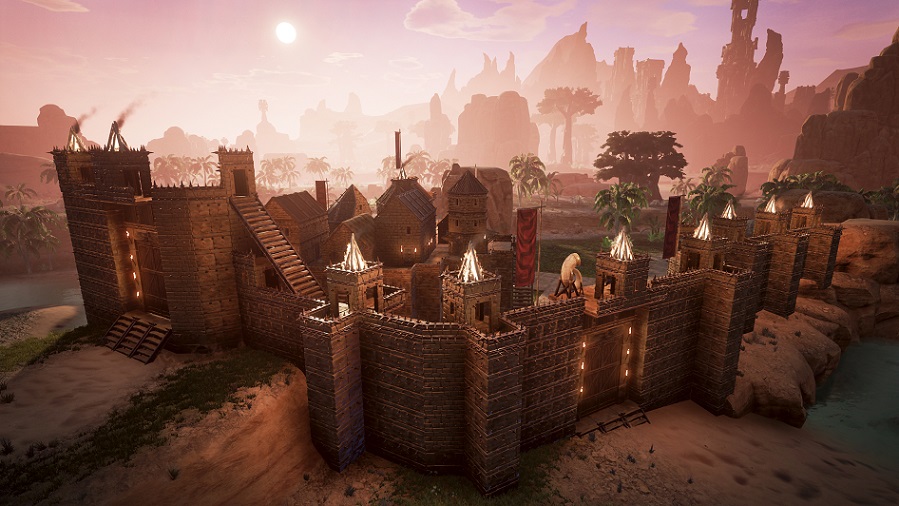 Going forward we’re going to be working on Conan Exiles in three separate tracks. The first track is centered around patches, bug fixes and performance and stability updates that are going out every one to two weeks. These will also include smaller features and additions to respond to requests from the community.

The second track is the bigger game updates, which are less frequent but will be bigger, more significant additions to the game. An example of this would be The Purge. Our current plan is to put out 4-6 big game updates during Early Access, with 2-3 coming out before summer 2017, and an additional 2-3 being released before Christmas 2017.

Finally, the third track is centered around releases on major consoles and even larger content updates like biomes. Biomes are additions to the game’s map with a different environment. These updates to the game will add new terrain, monsters, more equipment, god avatars and more.

What’s next for Conan Exiles

We’ve already talked about the trebuchet in a previous blog post, but we’ve yet to mention that we’re also going to be adding buildable siege towers, avatar defense and corpse lockers to keep the fallen bodies of your slain enemies. 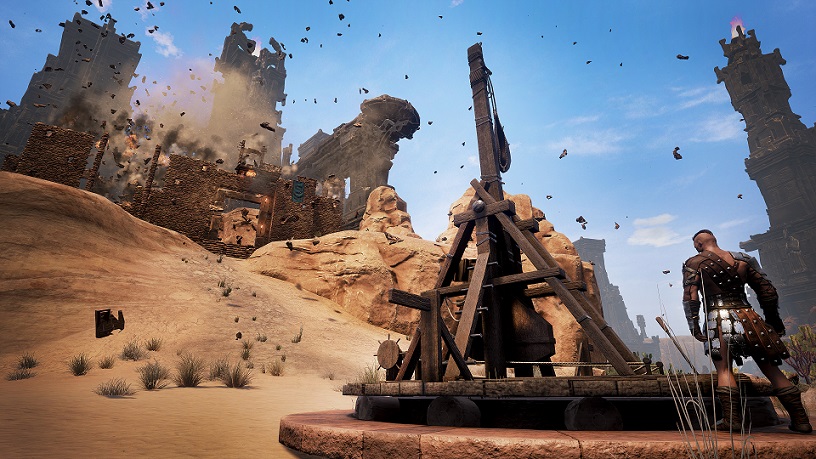 The trebuchet will let you bring down your enemy’s defenses before storming their keep. It’s a complex siege weapon that’s costly to make, but will definitely be a helpful addition to any raiding party. In order to get it to work properly it needs plenty of stone to act as counterweights to the projectiles you’re trying to launch. The more stone loading into the machine the further your projectile will travel. The trebuchet also needs to be aimed properly. Check out the video below for a look at how the trebuchet will work.

We’re eventually also adding a dye system for customizing your armor and clothes. When this update hits you’ll be able to gather color pigments from resources in the environment and craft them into dyes. Each piece of cloth and armor can hold several different colors, letting you put your personal touch on what you’re wearing. It’s also very useful for clans as they can choose colors that make it easier to separate friend from foe in the heat of battle.

A new dungeon is also going to be bolted onto the game very soon. This dark and foreboding place is located beneath the ruins of the Exiled Lands and hides a beast unlike any others. Exiles who choose to venture into these dark corridors need to fight their way through hungry monsters and devious traps in order to find and slay this terrible fiend.

Coming to Conan Exiles this year

We expect Conan Exiles’ Early Access period to last about a year before full launch in 2018. During this period we’ll be adding some major updates to the game in the form of things like The Purge, animal taming and mounts, sorcery, a settlement system and new biomes.

The Purge are enemy NPCs that will be sent into the Exiled Lands from neighboring nations to raid, pillage and destroy everything in their path. Players will have to band together to stop this menace or hide and pray to whatever god that might be listening that The Purge will pass them by. If you do decide to risk it the rewards might be worth it, but you should definitely take the time to build up your defenses.

Taming animals will mostly work the same as taming thralls. Players will have to drag their chosen mount back to a special pen that will break the animal’s will and turn it into a mount. The idea is that taming is an active process. We will also be adding animal thralls that will work as pets and transports for players, as well as mount and pet gear so you can customize your animal companions. 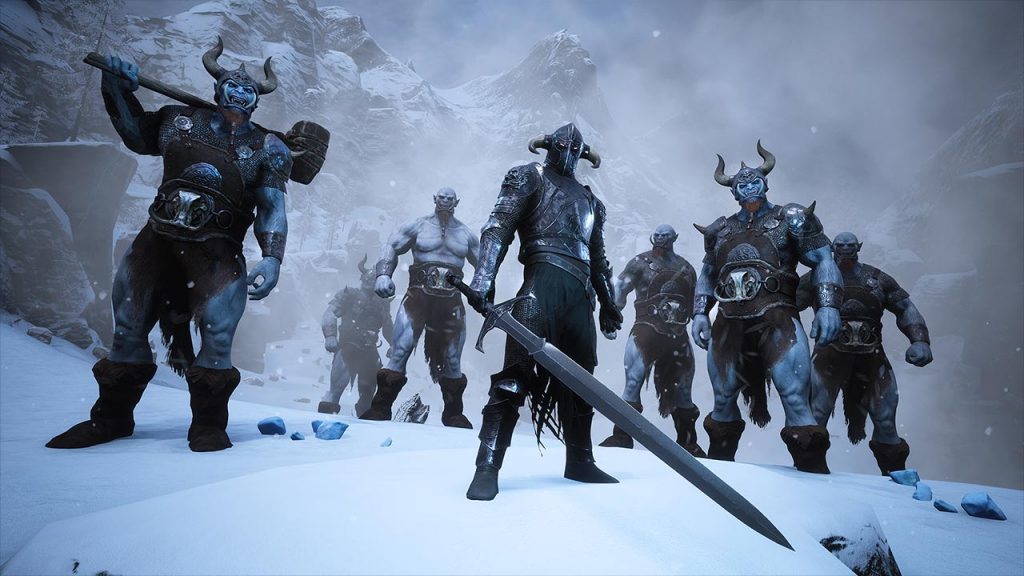 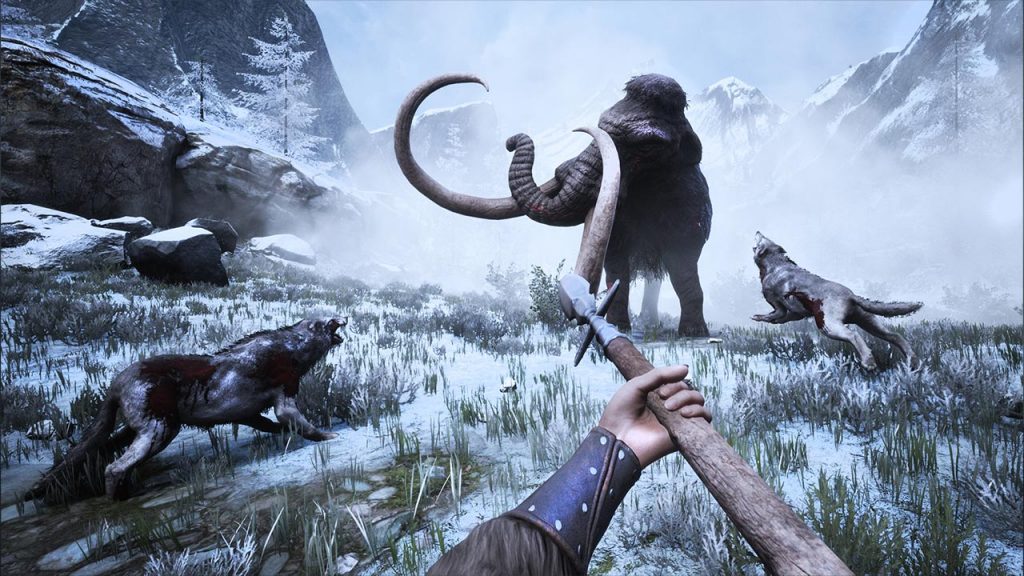 Players will start out taming horses and camels to use as transportation and pack animals, while bigger animals like rhinos and elephants can be used for more offensive purposes. We’ll also be working on adding mounted combat.

Our sorcery system taps into the corruption debuffs that affect your character when they descend into the dark and corrupted places of the Exiled Lands. The more corrupted you are the more powerful your spells can become, but it also comes at a cost. To gain power you are forced to cut into your health and stamina, making your body weaker. The sorcery system will, in turn, give you access to necromancy and summoning rituals, letting you call upon evil, twisted creatures to do your bidding for you.

Thralls will see an expansion through the settlement system that adds city life, thrall schedules, barracks, farming and trading. More thrall types will expand what you can do in the Exiled Lands as well as add more life to your cities and downs. Thralls will animate and move around, needing rest when night falls, forcing you to keep abreast on who does what and when. We’re also going to be adding a system for rescuing already captured thralls, getting them to come and work for you without needing to break them on the Wheel of Pain.

Finally there’s the Highlands biome, one of our biggest updates to the game in the coming months. The Highlands are a new zone with snowy mountains and a slightly more hospitable climate than the Exiled Lands’ deserts. Expect more greenery, but also more stone and soil. With this biome we’ll be adding a temperature system to the game, giving you an additional survival factor to keep in mind as you travel. The religion system will also see an expansion with the addition of sacrificial altars and new gods.

We hope this gives you a better overview of what’s to come to Conan Exiles. We look forward to sharing more details about our upcoming content as we continue our Early Access adventure.