Welcome back you chthonian fleshpools! Hope your weekend was delightful and that the new year has been treating you well so far. It’s time for another community newsletter and this week we have some stuff that we think you might like!

As you may already know, we’re launching Conan Exiles for PC, Xbox One and PlayStation 4 on May 8th. This means we’re now at the point where we need to start working on the build that will be put on the discs you can buy at your local video game store. The build needs to be ready at the end of January so the testing and certification process can begin. In practice, that won’t have a massive impact on players, but for us it might mean some extra overtime and work. Nothing we can’t handle, though.

We rolled out a PC patch today to take care of some bugs and crashes. This fixes the loot bag freeze and corrects some additional issues that have been requested by the community. The temperature system has been made more stable with this patch, and fall damage has been reduced.

We rolled out a bug and crash fixing update for Xbox on Monday. It gave us a tiny scare when it looked like none of the servers were working, but thanks to some quick work by G-Portal we were able to speedily take care of everything.

This was not the parity patch that would bring Update 32 to Xbox One. It will be released at a later date.

We did a studio wide playtest of the new combat system on Friday. Everyone on the Conan Exiles team were pitted against each other underneath the scorching sun of the Exiled Lands. The goal of the playtest was to, obviously, test how the new paradigm behaves and how we, as players, respond to it. Overall the test went really well. The Berserkers team gathered a lot of feedback on how it all felt to play and lingering bugs that need to be fixed. We’re doing another playtest this week as well. Come mid-February we hope to have a version ready for Testlive, so all of you can dig in.

What we can tell you are a few details on how it all works. Much like before, combat is divided into light and heavy attacks that can be freely strung together into combos. Attacks consume stamina, forcing you to not just rush in and blindly start hitting the attack buttons when encountering an enemy. You can also block oncoming attacks to stagger enemies, setting them up for a counter attack. So far so similar to the old system.

The new combat system adds in status effects, an improved system for staggering, more animations and more varied attacks. Status effects include things like bleeding, crippling, sundering, knockdown launchers, shield smashing and staggers. How these come into play will be revealed at a later date.

There’s also been done more work to differentiate the weapons and make them feel unique when you attack. Instead of just swinging or stabbing, each weapon type has specific attacks and animations that make them feel distinct. Daggers are quick, best used to strike and then dodge away. Hammers are heavy and take time to swing, but you can sometimes gain stagger immunity during attacks. Hammers can also launch people up into the air if you hit them right. Which is just awesome!

This week, we’re giving you both a peek at the entrance to the new Volcano dungeon and a look at a part of the jungle biome. You’ll have to wait a little while longer before you’ll be able to explore these place to your heart’s content, but we can promise you it will be worth the wait. 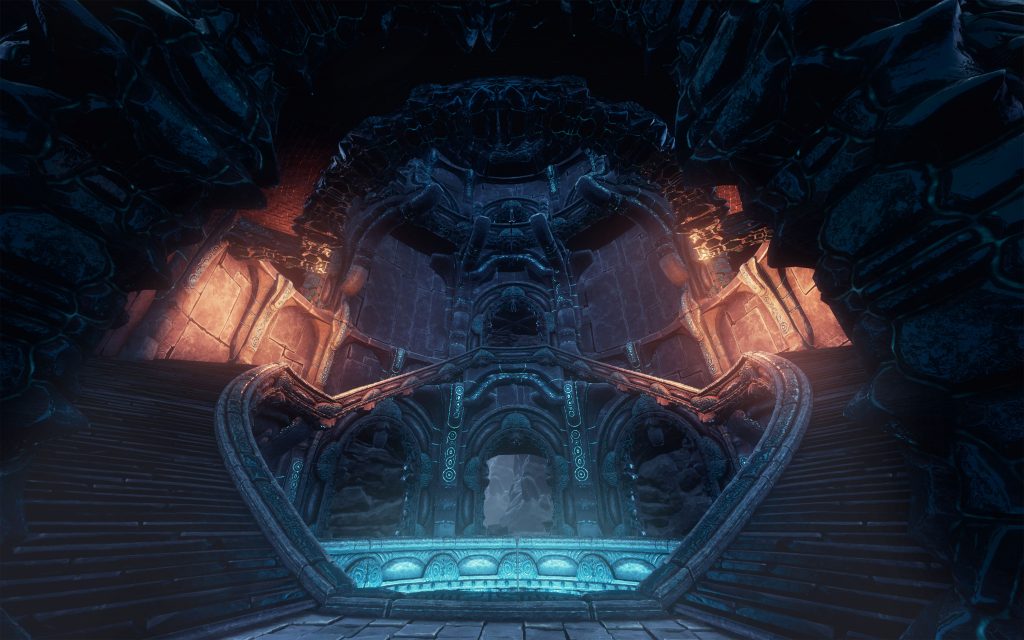 As you reach the volcano you’ll need to make your way into the center of the crater, where you’ll find the entrance to the dungeon. It looks like an ancient temple, a remnant from a bygone age, where an unknown people would conduct rituals of a strange and dark nature. This is what will greet you when you enter the temple. Now the temple is not the dungeon proper, it merely houses the entryway to the dungeon. How you enter it is up for you to discover. 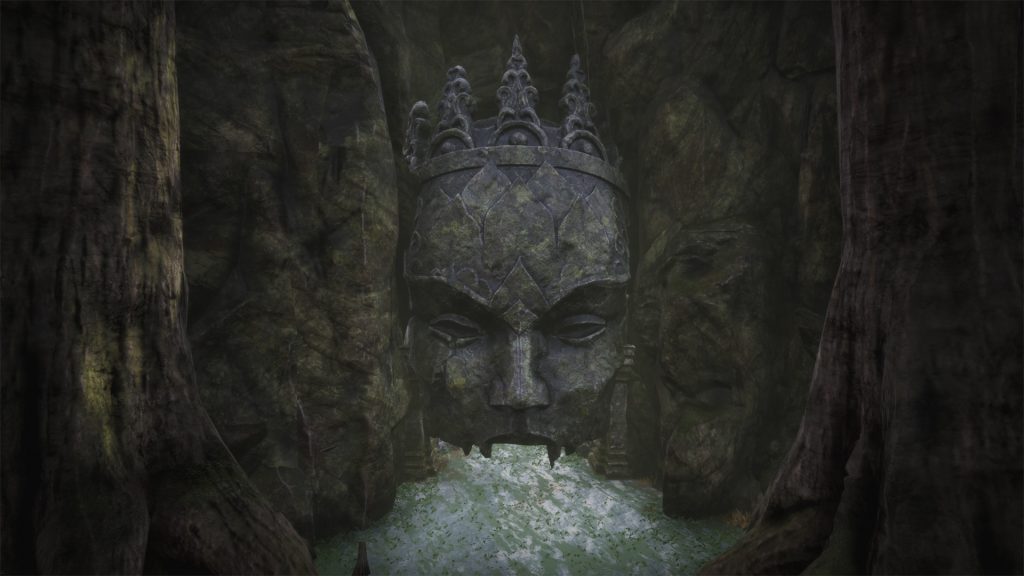 The jungle also contains the ruins of an ancient civilization, a people who were destroyed in a great Cataclysm long ago. You’ll find their remains scattered throughout this area. This giant stone face depicts the Witch Queen, a woman of great magical power who ruled with an iron fist. Now these ruins are all that remain of her reign.

This particular place connects the jungle to the icy north through an underground travel, allowing quick passage between the two areas for travelers.

As always, Vanguard is all about the bug and exploit fixing. Since this would be the place for it, we figured it’d be interesting to give a quick explanation of our bug fixing process. As the developers or the community discover bugs, glitches and possible exploits we’ll write up a report with a step-by-step guide on how to replicate the case in question. If our QA guys are able to consistently replicate the bug it’s assigned a severity and given to a coder or designer for fixing. Usually we need to rejigger a blueprint in the Unreal Editor, or we might dig into the game code in order to fix the bug. The fix is then tested by QA to make sure the bug has actually been fixed.

In addition to fixing bugs we’re working on a new HUD (Heads Up Display) to better convey information to players. We want to tweak the HUD to make it work better with the more action-packed combat system so you can see your health, stamina and other stats at a glance. Once we have something to show you, we’ll let you sneak a peek at what it looks like.

Over on the Art team our character artists have been hard at work with re-making King Conan’s Royal Armor from Age of Conan, which you will get to see very soon. This is an in-game item that will be given to everyone who buys the Early Access or Game Preview version of Conan Exiles. There will be a variant for female characters as well, naturally.

Improvements are being made on character models across the board. Everything from skin and facial textures to eyebrows and hair are being updated to optimize them further and take care of whatever issues and bugs might still linger. There’s also work being done to expand the make-up options during character creation.

Finally, intrepid players might have noticed that we still have two more gods left in the religion selector. Our creature artist is working on two more god avatars, which we’ll reveal in a future update, so you can start speculating now on who it will be.

We’re returning to our biweekly dev streams on Twitch (that’s the every two weeks definition of biweekly) on Friday, January 19th. It’s going to be a similar thing to the stream we did before the holiday break, where we play the game to have fun and chill out. Nicole and Jens Erik will be teaching Andy, who’s community manager for Secret World Legends, to play Conan Exiles.

Hope you’ll be able to join us for some laughs and good times on our Twitch channel. twitch.tv/funcom.

We’ll see you next week for another newsletter!