Good evening my fellow beings of light and shadow, and welcome back to the Conan Exiles community newsletter. It is a period of civil war. Rebel spaceships, striking from a hidden base, have won their first victory against the evil Galactic Empire. No, wait. That’s Star Wars.

We’ll be doing a quick recap of the last week before venturing into a Halloween competition, news about the Decay Timer, an update on Thrall/Pet behavior and some information about LOD range.

We rolled out hotfixes for PC, PS4 and Xbox last week and we’re currently investigating issues that popped up in the aftermath of the hotfixes. There’s been reports of increased lag on all platforms, which could potentially be tied to the new Event Log. The Event Log filtering wasn’t working correctly, but this has been fixed internally now and will be patched. The UI is also getting an update and once it’s been patched in you will be able to filter and choose proximity for logging events. We were able to find a couple of new bugs and issues thanks to the new Event Log, so while it needs some additional updates the basics are working as intended.

Another reported issue is the matter of thrall and pet hunger resetting for certain companions when a server restarts. It’s not happening consistently across the board, as we also see players reporting that the system is working as intended and abandoned companions are dying. This makes replicating and fixing the issue a bit trickier, but we have several leads that we’re following up on so we can fix it.

Disappearing corpses are also being looked into by a coder from the Vanguard team, as we still see player reporting this as an issue. We rolled out an update previously that reduced the number of corpses per player to three, to avoid certain performance issues and potential exploits. We’re going to increase this limit to 10 and have QA test what impact this will have on performance.

Finally, we’re investigating the delay when opening and closing doors in the console versions, which popped up after the latest patch.

Since it’s October and Halloween season is upon us, we decided it was time for you, our amazing community, to show your creative talents, Halloween style, with a pumpkin carving contest! Each participant will get a free DLC key of their choice, and the grand prize winner will receive a 21*18 inch canvas print of this amazing Conan Exiles artwork made by our amazing concept artist. 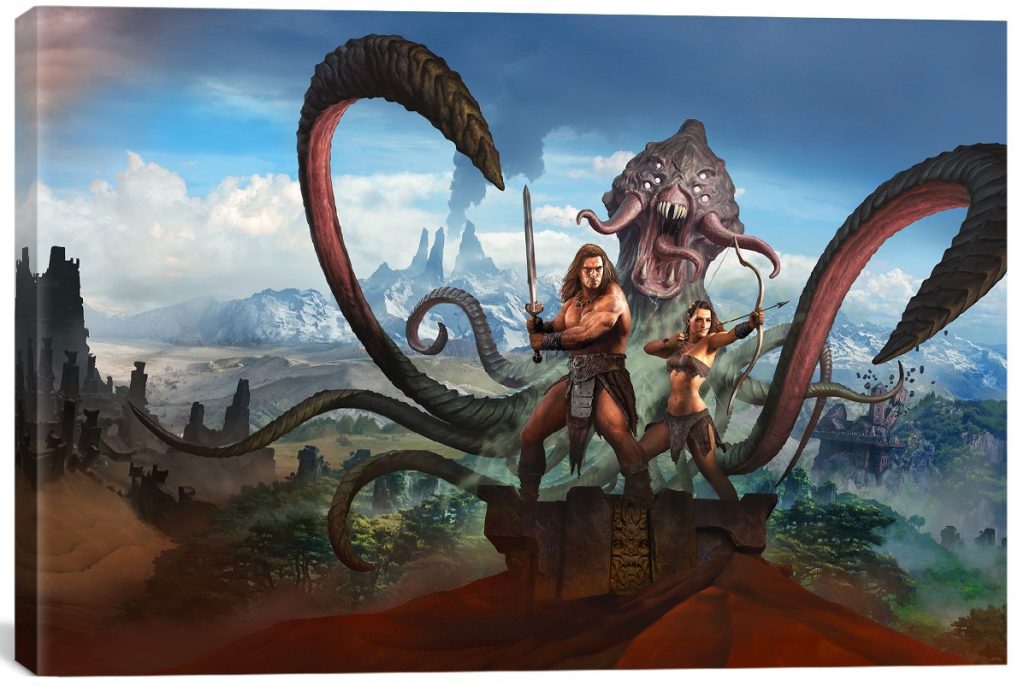 The competition starts today and will run for the next two weeks, plenty of time to get a pumpkin carved. Here’s some inspiration to get you started.

Rules for the Pumpkin Carving Contest are as follows:

We’re going to be increasing the standard decay timer on our official servers! Currently it will take your settlement 6 days to reach a state of abandonment. At this stage anyone can walk up to it, hit a button and demolish your abandoned building. The structure will demolish itself automatically if you wait an additional day. After 7 days in total it will be gone.

We’re bumping this up to 8 days, with 7 days until abandonment and then a final, 8th day for automatic demolition. This gives you a little more time to refresh your settlements.

This change has already been made on most servers, but you need to log in and refresh your buildings for the extra time to be added. It won’t happen automatically just because we change the settings.

We wanted to give a quick comment/update on new thrall and pet behavior. This was rolled out in the first part of Update 34, in early October. You may have noticed that the “Move” command for thralls and pets has been changed to “Move and Guard” instead. After you plonk them down on a new spot, that area will be designated as home.

When your thralls or pets follow you, and you tell them to stop, they will teleport back to their home if you leave them there for about 10 minutes. This also happens if they get stuck anywhere when they’re following you. So, if you’re out exploring, and your favorite thrall or pet seems to disappear when following you, it might just be that they got stuck and went back home. If they’re dead, it will show up in the Event Log.

If you want you can use this feature as a way to scout certain areas, by taking thralls and pets with you and setting them to guard in a new location. If they get attacked you will find who did it and when in the event log.

LOD Range and the “Static World”

There was a longer discussion thread recently on the forums where a player was asking why the game world appears static whenever NPCs and creatures are outside a certain range of the players. To answer this query, we enlisted the help of lead gameplay programmer Scooper, who you may have seen on the forums and in our streams.

Conan Exiles has a very big world with everything running on one server. The world has around 6000+ NPCs roaming the world, not counting player thralls and pets. Actually, probably even more by now.

The simple fact is that running NPC behavior on all these NPCs at all times in such a big world is not something current hardware can handle with UE4. It only gets worse when you add in players and their dynamic content, such as buildings, placeables, thralls and pets.

We have, however, done a lot of trickery to counter this. The performance we have today is leaps improved from the early days. We are also constantly working on improving this and have more optimization coming in future patches.

The “static world” is part of a system we call the AI LOD (Level of Detail) system. This turns down the amount of CPU resources an actor (Placeable, building or NPC) receives based on their proximity to a player. Outside of a certain range they go into a suspended mode where they are not given any CPU cycles, and basically go into a sleeping mode.

We do this because there is, in most cases, no point in having the actor run at full speed without a player nearby. And we have “catch up” methods in place where they are needed to make sure they account for the suspended time.

If a player can’t even see the crafting station, it can do this much slower or even not at all. When a player returns to the area and wakes it up, it catches up on X minutes of work. When you inspect it you will see the same results as if you had been standing there for those same X minutes (The reality is slightly different, we run a few ticks of crafting here and there even if the player is not around).

If you’re an admin and you want to have some “fun”, and see what happens when nothing is suspended, all logic running at full speed and all NPCs freely roam the server, you can try using the admin command “ForceAILOD 0”.

PLEASE BE CAREFUL WITH THIS AND TRY IT AT YOUR OWN RISK!

You can turn it back on with ForceAILOD –1, but it’s very possible that you will not be able to do so. Be prepared to restart your server. This shouldn’t influence anything on the server per se, but you should take a backup of the server’s database file as well.

Tldr; NPCs remaining fully awake when players aren’t nearby is not worth no one being able to play.
However as mentioned, there are still more performance improvements to be made and coming your way.

It is stream week once again and we’ll be live on Twitch and Mixer this Friday at 5pm CEST. We’re going to talk about the upcoming Night of Lost Souls Halloween event and demo some of the spooky content that you’ll experience once the specters descend on the Exiled Lands.

We’ll also be doing another Community Spotlight, so get those screenshots and builds shared with us so we can show them off during the stream! There will also be key giveaways, as is tradition. We can’t wait to see you there.