We have some very exciting news this week! You may have already caught the announcement on Monday, but in case you didn’t, we’ve revealed the release date for Conan Exiles: May 8th, on PC, Xbox One and PS4! Click here to read the full announcement. You can find the trailer below:

Friday was Joel’s last dev stream before the Christmas break, as he’s traveled to Australia to spend some time with his family. He’s not completely off the hook, though, as he will be doing some writing work while he’s over there.

You can see the full stream over on our YouTube channel:

Finally, here’s something you might not be aware of: If you combine the word count of all the item descriptions in Conan Exiles you would have a text about the length of the first Lord of the Rings novel.

Within two hours of the patch rolling out we started getting reports from players saying their vaults and altars had disappeared, much like when we did the server wipes and item purges before update 31. This, obviously, wasn’t intended. We did a bit of sleuthing and found that the item purge script had made its way into the build we rolled out for Update 32, causing altars and vaults to go poof. We don’t know why this happened, but we’re working on figuring it out so it doesn’t happen again.

All our patches go through testing before they go live. The item purge is set to activate when it finds the “Official” tag in the server setup. Our test server, however, is not tagged as an official server, so the script didn’t activate on our test server.

Fortunately we were able to catch this quickly and implemented a rollback on the official servers to try to restore people’s progress. Please remember to report server issues, bugs and feedback to us on social media, our Steam forums or on our subreddit.

Update 32 will be the last content update we release before Christmas. If need be there will be hotfixes to take care of whatever issues may linger after we patch. We want to leave you with a stable and fun game for the Christmas break, after all. The next content update will be released once we’re in 2018.

The Xbox version of Conan Exiles was on sale this weekend for 50% off! This was in anticipation of the game’s price change when we opened up for retail pre-orders. We hope you were able to secure a digital copy of the game when it was on sale. If you’ve already purchased Conan Exiles during the Game Preview period you won’t have to pay for it again once when the full version has been released.

For Xbox we’re looking at getting a hotfix/bug fixing patch out before Christmas to take care of some of the issues we mentioned last week, like avatar tokens not being craftable.

Every Friday, the development team meets up to talk about what they’ve been working on recently: New content and features, bugs that have been fixed, and things to come down the pipeline. To not make this newsletter overly long we’re only sticking to the highlights. Even if something isn’t explicitly mentioned things are still being worked on “behind the scenes”, and we’ll mention these when they’re relevant.

The Vanguard are at the forefront when it comes to fixing bugs and creating improvements to things like UI and gameplay systems. They’ve been revamping the game’s user interface, creating a new clan screen and Attributes screen, and making sure that Update 32 is stable and working properly. You’ve already seen the new Attributes screen in our developer streams, and we’ll show you the full new UI once that’s ready to be revealed.

Two of our Vanguard coders have been helping out with implementing the new combat system, while another have been working on a double jump mechanic for players who unlock that perk.

In addition to working on combat the Berserkers team are also improving animations and character movement. On the combat revamp side, they’ve been focusing especially hard on hit confirmation, ways to let the player know they’ve managed to hit their target (or been hit themselves). They’ve also been finishing up their work on target locking, because we want players to actually hit what they want to hit rather than flailing about like a crazy person.

Over on the animation side we’ve finally gotten our new motion capture room set up in the basement! All the combat animations have been motion captured and work is moving steadily forward. We can’t wait to show you what we’ve been working on.

Two of our designers from the Terraformers team have started prototyping and testing ways we can improve how the game loads and streams in assets. If the experimentation works we should be able to save on memory when the game is running, creating a much smoother gaming experience for everyone.

We’ve had a graphical issue in our game for a while now where light would glow through hair when you were standing near a light source. It doesn’t look great. TL;DR from our character artist is that the Unreal Engine shader coding and Z-buffer would “brainfart”, giving the hair an unnatural glow.

Thankfully, it has now been fixed! 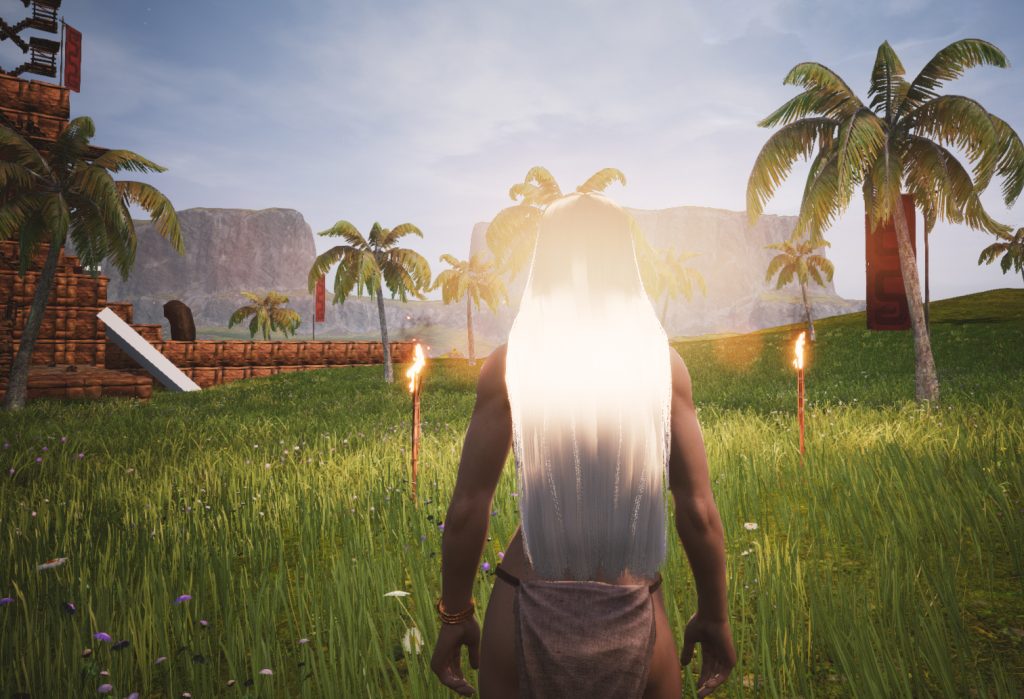 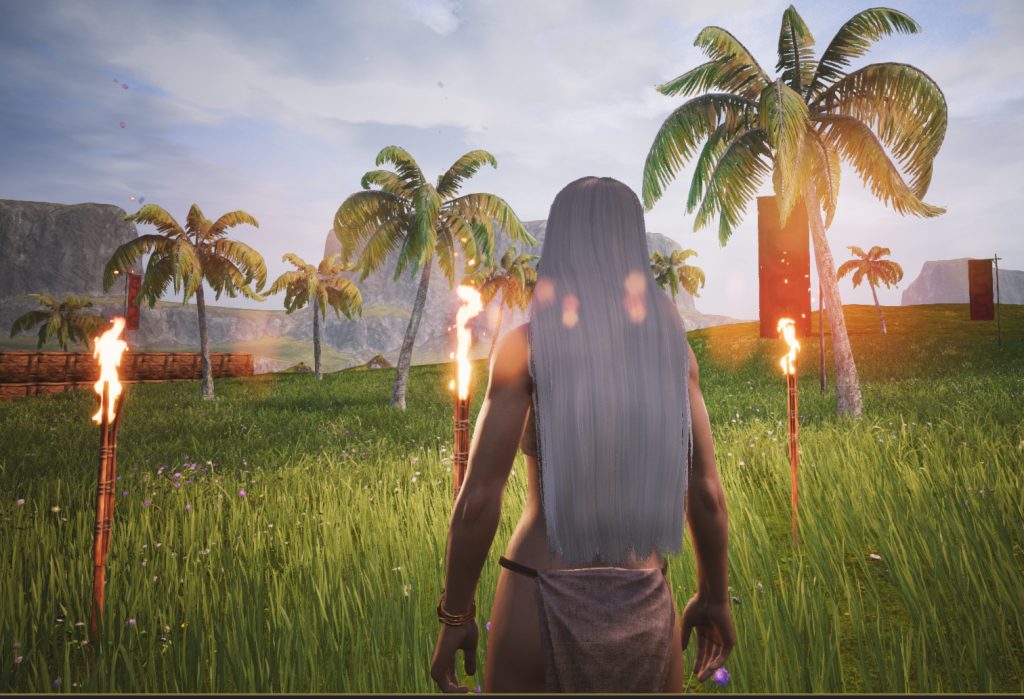 Everything needs more material and texture work to get it working 100% correctly, but this is a huge step in the right direction and will work as an intermediate fix.

On the technical side of things work has been progressing on adding voice chat to the Xbox One version. They’ve gotten it working on our development builds, but we’ll need to put it through its paces before we can roll it out. We’re able to hear each other, at least.

Secondly, they’ve been testing setups for dedicated servers on PlayStation 4. They’ve almost gotten it to work, which means they’re able to connect to it, but haven’t gotten to run around and really test the server yet.

Since launch we’ve been getting a lot of questions from console players with regards to nudity. When we first launched in Xbox Game Preview the idea was to release a nudity patch that players in certain territories could download for free to unlock the full nudity option. Other players would be limited to partial nudity.

Said nudity patch has been unavailable since launch due to a last-minute issue with the Xbox Store. All territories have therefore been limited to partial nudity. Microsoft was investigating a solution to the issue and have come up with something that will allow us to roll out full nudity on consoles where the game’s rating allows for it.

Full nudity will be made available on consoles on launch day, May 8th. We’ll have more information on how players will be able to access the full nudity option on launch day.

Our external QA partner, Testronic, are running a stress test on Conan Exiles this weekend to collect data and find more bugs for us. We wish them good fortune out in the Exiled Lands and hope they don’t run into too many hungry hyenas.