We’re still crunching and working overtime in order to get everything submitted for the Gold Build deadline. It’s just a couple of days away! Bugs are being fixed, gameplay is being tweaked and content is being added on an almost constant basis.

As mentioned in previous newsletters, the Gold Build is what’s making it onto the discs you can buy in stores. Just because we’re submitting a Gold Build does not mean our work is done once we’ve submitted. We still need to patch Update 32 to Xbox, which we hope to do in March at the earliest, and we will also patch the new combat system to Testlive, aiming for mid-February. On launch-day there will be a patch including the Jungle, Volcano, additional features and plenty of bug fixes.

If you’re interested in seeing all the changes we’ve been doing to combat you need look no further than our YouTube channel. We did a livestream on Twitch where we talked about how we’re revamping combat and what players can expect from the new system. We hope you like it.

The Vanguard are busy fixing bugs and doing general gameplay improvements to the game. Our systems designer is working on making the sandstorm do damage to players, which is a key feature of the game. Other fixes include making sure death, respawning and the death markers work as intended and taking care of various lag spikes.

Improvements include things like making sure NPC weapons don’t “hang” in the air after a server restart. There was also a problem with arrows getting stuck in the air if there was a collision problem between the shield and arrow models. Finally, if you’ve gotten shot by multiple arrows you might end up looking like a pin cushion because arrows will be stuck in your character. We’ve now made it so that rolling around will break the arrows.

If you primarily play the game in single-player mode this next section is useful for you. We’re adding a change to make it so you don’t automatically have admin rights when starting a single-player game. This is to encourage players to play the game as designed. Getting admin rights is very quick and easy, though: you just click a button and you have the power of a server admin.

Our artists have been knee-deep in playtesting this past week. Now that we’re approaching one of our development milestones we’re trying to get in as much internal playtesting as possible to root out additional bugs and other things that needs fixes. It’s also good for the artists to see how their creations play out in the game. They can see how it impacts performance, how it moves and changes depending on various situations, and then do the whatever changes are necessary.

The 3D artists, who are the people creating item models, are getting some character artist training down the line so they can help out with making creatures and clothing and armors. The end goal is to ease the load on our character artist and have more people capable of transitioning between different artist roles.

Over on the animation side, there’s a creature revamp in the works. The new combat paradigm isn’t just meant for PvP, but PvE as well. As such we need to adapt our monsters and animals as well. We’re adding in new attack animations, with a greater focus on telegraphs and anticipation time in order to make creature combat more tactical.

Another part of the creature revamp is making animals and monsters feel more realistic. They’re getting more emotes and idle animations that will play out as they go about their business in the Exiled Lands. Expect to see hyenas munching on deer carcasses, while feline creatures and Shalebacks might lie down for a nice rest. While it might seem like a minor update it adds more realism and makes the game world feel more alive than previously.

If you joined us for our combat stream on Friday you may have noticed the updated HUD. We experimented with over 4 major and 20 minor HUD variations (insert your weed joke of choice here) when designing the new HUD.

What would be the best way for us to convey information at a glance? Revamp the circles? Replace them? With what? Bars? A radial menu? Or do we design something that looks like the bracelet the Exiles wear around their wrists? Finally, we ended up with something that combines the lot. 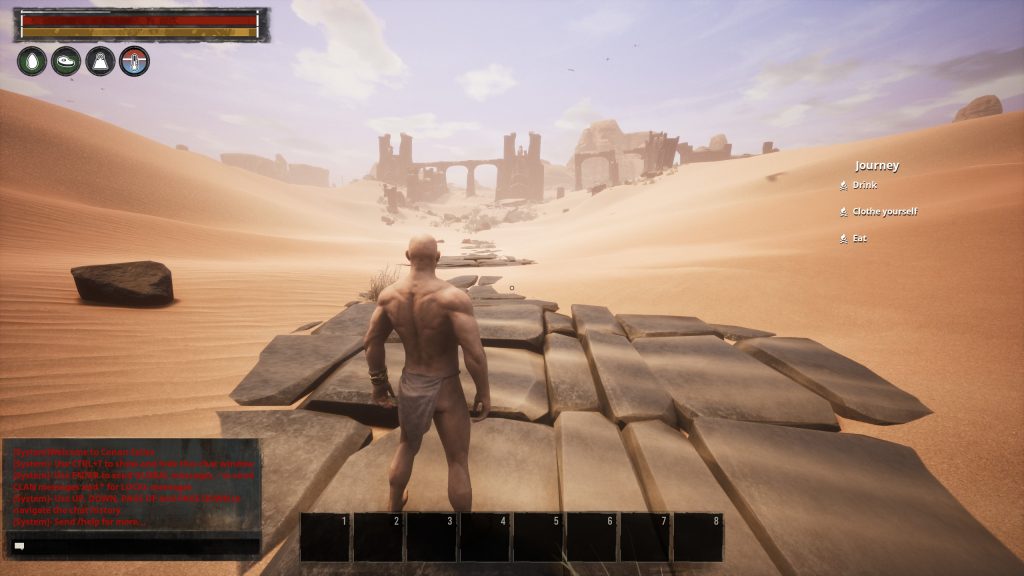 Another part of the HUD is the Journey GUI. You’ve seen this before if you’ve ever hit the J key. The Journey GUI is made to teach the player the game’s mechanics and push them to explore and figure things out. Now we’re making the Journey GUI stand out a bit more. Players are given a list of three tasks that will be switched out automatically whenever you finish a task. This way we’ll be able to give players a more directed game experience.

The Berserkers team has been planning out the workload for the remaining combat fixes before everything goes to Testlive. We’ve also gotten a ton of feedback from the community after the stream. Thank you to everyone who reached out. Although we might not be able to respond to everything we do read what you have to say.

This week we’re also doing a playtest over in the US office to get some fresh eyes on the combat changes. Everyone over in Durham, NC, are usually working on Secret World Legends, but will help us out with playtests and feedback if needed. We do the same for them, obviously. Then we’ll address the critical feedback, then we roll out on Testlive.

One of the things remaining on the combat roadmap is deciding what to do about first person. When the new combat rolls we’re forcing you to switch to third person when you equip a weapon. This is because we’re intending for Conan Exiles to be played in the third person perspective with the new combat system. Having said that it will be possible to do pretty much everything else (harvesting, building, crafting, exploring) in the first-person perspective. We know a lot of players prefer first person and we want to accommodate them as much as we can.

There will be no Conan Exiles stream this week, but we’re working on our plans for a stream next week that we think you’ll like.

We’ll also working on a list of features that will be available to players at launch. While we did plan to have it ready to go out this week it looks like we’ll need to shift it back to next week instead. We need to get it translated into all languages supported in the game and translation work takes time.