A year ago today, our Early Access journey began with the release of Conan Exiles. And what a year it’s been!

Over the past 12 months both Funcom and Conan Exiles has changed and grown into something truly special. New content has been added on a consistent basis, ranging from new weapons and armor to game changing additions like climbing and siege weaponry. We launched a new biome, doubling the game’s play field. We’ve also fixed a butt-load of bugs!

I wrote you a banging choon to go with this @screencuisine pic.twitter.com/UIXk7dcInK

We’re incredibly proud of the things we’ve accomplished, but this Early Access adventure is far from over. Even though the finish line is moving closer and closer we still have a lot of work left. Everyone is working overtime and weekends to get things ready for the Gold Build.

Of course, we would be nothing without our amazing community. You guys have stuck with us through thick and thin, holding us accountable when we mess up and praising us when we succeed. You’re just as much as part of this journey as we are. From all of us here at Funcom, thank you very much.

Seeing as we’re hunkering down to hit our deadlines the future newsletters might be a little lighter on content than previous ones. For next week we’re planning a blog post of what players can expect from the game at launch in terms of features and functionality. And please keep in mind that we are planning on supporting Conan Exiles once we’re out of Early Access.

Our art team has been cranking out new assets for a variety of things. The new biomes will come with new crafting materials that you can make weapons and armor out of, and there are several cultural armor styles we’ve yet to release. In fact, we can give you a sneak-preview at one of them right now: The Stygian Medium Armor. 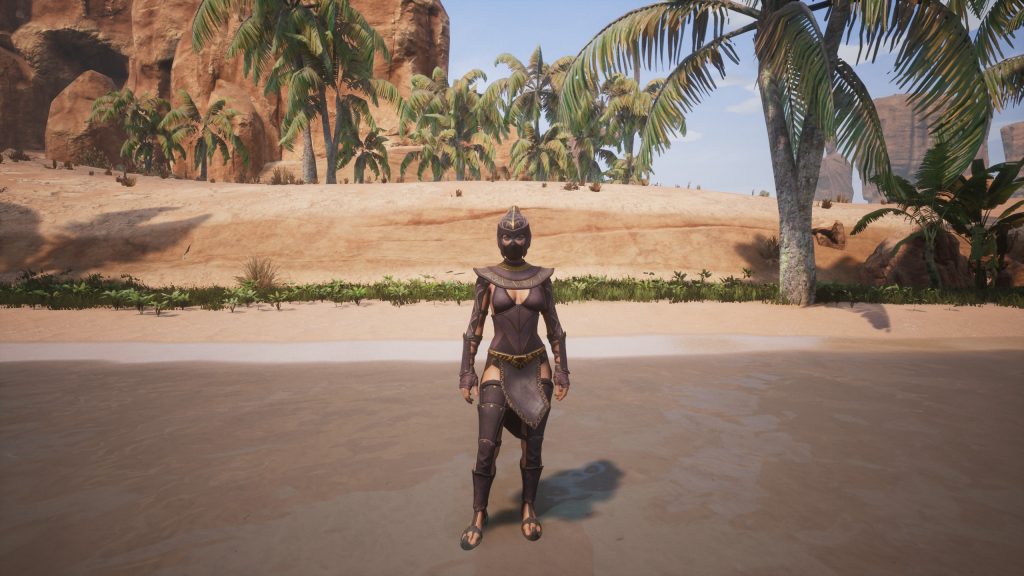 Since Stygia is a direct parallel to Egypt in Conan’s universe we really wanted this to shine through the outfit, creating an armor set that looks like it belongs to a pharao’s elite guards. The pattern on the arms and chest piece is meant to evoke snakeskin, as snakes are holy in Stygia. Like all the other armors in Conan Exiles the Stygian armor can be re-colored with the dye system, letting you create your own, personal look. 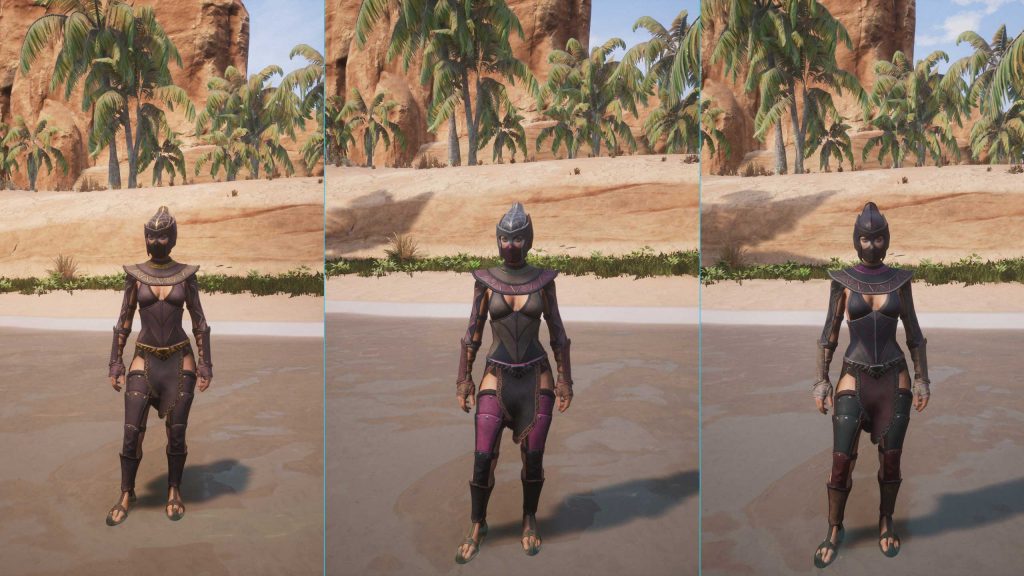 For launch we’re also revamping the loading screen with new art assets, and some tool tips to help new players just starting out in the game. In addition to this the Journey GUI will be more front and center, further aiding you along the path to becoming the greatest Exiled in the land.

When the art team isn’t busy making models and textures they’re helping out with playtesting and bug reporting, as needed.

We see some of you asking why the Volcano or Jungle hasn’t been released yet, and why we’re still holding onto them for launch. In short, we want to take the time to make sure the new playfields are as well made as possible.

The Jungle biome has about two-three people working on it on the Terraformers team, and they’ve built pretty much everything from the ground up. The layout, the size and shapes of buildings, the size and shapes of the trees, the way the light is filtered through the trees, it’s all them. The art team helps out with textures, creatures and the general building blocks, but actually creating the entire biome is done by a small number of people.

It’s a big area, built up from nothing, and it even turned out bigger than we initially planned. Which then adds more time to development. The content rebalance will also have an effect on resources (like what you get when you use certain tools on specific resource nodes), NPCs and creatures in the Jungle, and it’s a time-consuming process.

Once everything is laid out we need to go back and re-consider a lot of the choices that have been made. Are the creature and NPC populations too high? Too low? Where do we place resources? How do we funnel players towards points of interest? Should there be creatures here, or nothing? Tons of questions, big and small, that are considered over and over until we finally reach a point where we’re satisfied with our decisions. Right now, we’re rethinking population, and doing multiple passes to tweak it just right.

At the same time, we’re playing through the Jungle on our internal dev servers so we can offer feedback to the Terraformers working on the new playfield. It’s all an ongoing process that results in a better final product.

We haven’t heard from the Audio team in a while, so we thought we’d check in to see what they’ve been up to. Arild, our audio lead, has gotten some help in the form of a junior sound designer named Bendik. They’ve been revamping the sound of combat, making things sound more visceral. The environmental sounds and music has also gotten some love.

Finally, as mentioned a few weeks ago, we’ve gotten new music from composer Knut Avenstroup Haugen. He delivered 7 new tracks for the game, giving the game’s soundtrack a total of 23 original pieces of music. You’ll basically be hearing music wherever you go and whatever you do in Conan Exiles.

You’ll get to hear all of it once the game launches on May 8th, but here’s a small preview of one of the new tracks: New Asagarth.

Since we’re celebrating our one-year anniversary we figured our next developer stream should be something special. We’re doing a combat stream to show off the new combat paradigm. This will be an extended, in-depth look at the changes we’ve made, with the developers in charge of the whole thing.

We hope you all tune in, because we know it’s going to be a great stream.

Starting today the community newsletters will come out on Wednesdays instead of Tuesdays. This is just so there’s more time to write and prepare everything that needs to go into them.