Weekly Community Newsletter – Launch and Beyond

Good evening little dogs of the intertube. We’re back with another community newsletter, recapping the last week of development on Conan Exiles.

On Friday we released a blog post with a list of what you can expect from Conan Exiles at launch. We’ve been following the community’s reactions and while we might not be able to respond to everything we are reading your feedback. We have a vision of what Conan Exiles should be, which might differ from your vision of what Conan Exiles should be, and our job as a developer is to merge the two into a coherent whole. Game development is normally a closed process, but because we opted for Early Access we also had to make sure that the community had a voice. The new combat system is a direct consequence of this interaction that fits in with the Conan vision.

Coming up in the beginning of March we’ll be running compatibility tests to check the game against several different types of hardware configurations to see how the game performs. The purpose of the test is to identify performance bottlenecks and compatibility issues, e.g. problems running the game with a specific type of CPU, GPU or OS version.

As part of optimizing for console we have introduced several tweaks and fixes that improve performance on PS4 and Xbox One. The good news is that several of these optimizations also apply to PC, and are especially useful on lower-end PC configurations. We will be testing these fixes on a wider range of PC hardware configurations than we have access to internally as part of these tests.

It’s been a while since we’ve heard from the guys over on the technical side of Conan Exiles, so we figured it would be good to check in and see what they’ve been up to. While the Vanguard works directly on game features, Tech and Tools work on backend features. The Tools subteam are the guys in charge of making sure everything we use to make the game works as intended. They build and maintain our internal tools for source control, build systems and version making, crash report gathering and handling, and smoke tests. Sometimes they also help create systems that are implemented into the game, like the voice chat system.

The engine subteam focuses on a wide array of things needed for the game to run properly, such as dedicated server support, client and server optimizations, engine level bug and crash fixes, and a host of other technical stuff going on under the hood. The game’s sand tech, where you’ll leave trails in the desert sand as you walk, comes from the engine subteam. The optimization tests we mentioned earlier are also within the realm of the tech team.

This past week the Tech team has been battling it out with engine optimizations and various certification issues that have popped up when we’re submitting builds to Sony and Microsoft. Definitely valuable work now that we’re moving ever close to leaving Early Access.

The Monster Hunters team was introduced last week as the team in charge of revamping monster and creature NPCs for the new combat system. They’ve been prototyping monster attacks, primarily testing new setups for Shalebacks, crocodiles and hyenas for now, in addition to experimenting with hyper armor. Hyper armor means the creature can’t be staggered when it performs certain attacks, putting an aggressive player in greater danger when engaging a monster.

Our end goal with the creature revamp is making them feel smarter and more dangerous to players. The old combat system was more like an MMORPG than an action game, where a creature would stand in front of you and attack. Under the new paradigm we plan to make creature attacks more varied, with better anticipation time and “tells” so you’ll know what comes next.

In addition to being the combat team The Berserkers are also the guys in charge of movement and animation for the human characters in the game. Since we want to support using tools in the first-person viewpoint we have been revamping the first-person perspective animations to make it all look better.

Based on community feedback from the combat stream the Berserkers have been making some improvements to camera behavior when locked onto a target. We had a lot of players ask us not to have your character in center frame when locking on, as this would obscure your target. We’ve listened to your feedback and moved the camera up higher and slightly to the side. This way your target will always be visible to you when fighting. The camera will also move dynamically depending on where you are in relation to your enemy.

Finally, there’s been some changes to the way stun-locking works in the game. All heavy attacks will give you hyper armor, preventing you from being stun-locked. This will not only help when facing a crowd of enemies, but also means you can more reliably land hits. Then again, that goes for your opponent as well.

Over in the art department we’ve had a character art workshop for our 3D modellers. This is so we’ll have more people to help us with our character assets and art pipeline in the future. Currently there’s three people creating every piece of clothing, every human model and every monster and creature you see in the game. Thanks to this workshop we’ve been able to diversify and have more people available if need be.

In terms of new clothing and outfits the Derkheto priest(ess) outfit is coming together nicely in the concepting stage. Derkheto is a death/sex goddess, but designing her followers’ clothes is proving trickier than you might think. You’ll get to see it soon and we think you’re going to like it.

The Vanguard team is working on translation and UI fixes, making sure the game manages to display all the 11 languages it’s being translated into. Some languages have been breaking the user interface in various exciting ways. This obviously can’t happen in a finished game, which is why we’re fixing it.

One of our coders has been doing some fixes to the temperature system, digging through it to work out some of the kinks. Bugs frequently encountered by the community have been fixed and the system should be more reliable than before.

If you caught up with our blog on Friday, you’d see that we’re adding a fast travel/teleportation feature. We always talked about doing teleportation as part of the sorcery system, and since mounts aren’t making it into the game for launch, we wanted to create a way for players to cut down on on-foot travel time. The Map Room, which is a placeable you can build, is our solution. By building a Map Room in your base you can travel to special obelisks you’ve discovered in the Exiled Lands. To build it you’ll need to find the recipe out in the Exiled Lands and when you teleport or get close to the obelisks you will gain corruption, cutting down on your max health and stamina. 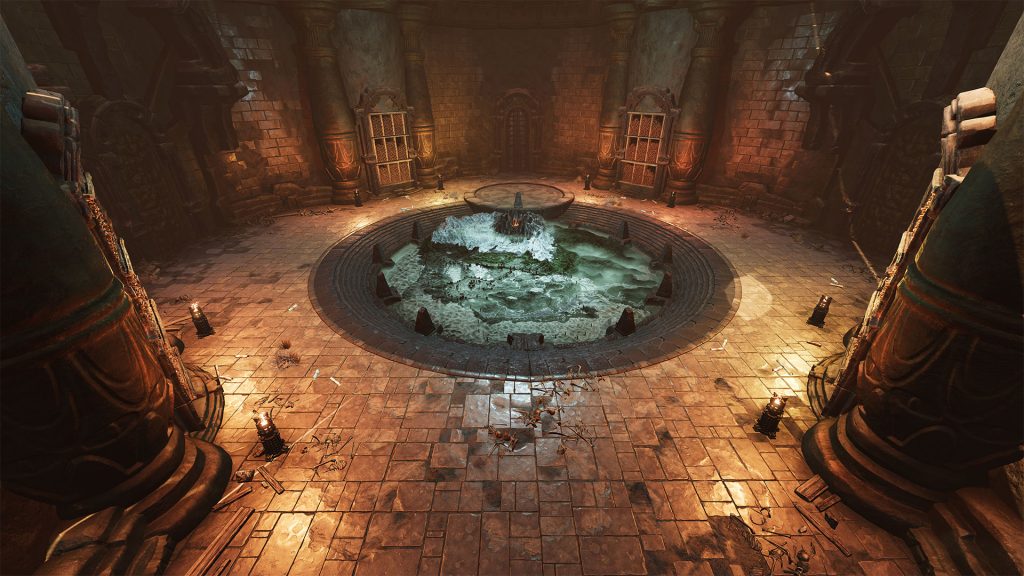 Finally, we’ve been conducting some memory tests on our Testlive servers with the help of diligent members of our community. They answered the call we put out on Twitter, jumping into the servers to play, build, fight and give us some very valuable data. Thanks everyone, we really couldn’t have done it without you!

The testing was to check out some recent memory leaks, seeing what triggers them. We’ve run three tests on Testlive and gotten some leads on how to proceed with taking care of the issue. We are aware of the way our live-servers are performing and have collected databases to examine them for data on how our players are playing the game. It gives us a lot of important and useful information in terms of bottlenecks and fixes we need to do. We’ll also do spot checks on official servers, so you may have been playing with a Funcom developer without even knowing it! This way we’ll be able to improve performance on both PC and console.

Our Community Manager, Jens Erik, will be at the Norwegian Game Awards in Trondheim on Friday. We’re sponsoring the event and giving away a Best Game Concept award, so if you’re at the event feel free to come around to have a chat.

Also, there won’t be a Conan Exiles stream this week, but mark your calendars for March 2nd when we’ll be streaming again.