Welcome back to the weekly community letter. In case you missed our first letter you can read it right here to catch up on what we talked about last week.

This week will mostly be about fixes and optimizations, but we also have some things to show that we think you’ll like. We know we do! Like the things we’re going to show you.

There are about 6 months left of Early Access. We’re currently mapping out the timeline implementation of the features and content that remain before full launch in Q1, 2018. There’s still a lot to do, of course, and we will keep you updated.

We patched PC last week! Version 67264/13947 went live and introduced a lot of changes. The biggest was the update we did to the repair system: From now on you won’t be able to repair an item unless you already have the recipe. This change was made so we can increase the value of loot drops in the game – now we can give you a cool weapon earlier in the game, safe in the knowledge that you can’t completely circumvent the crafting system.

We’re going to do further iterations on the repair system such as adding a time cost to repair (to avoid cheesy stuff like instantly repairing weapons in combat), and adding items like repair kits and whetstones, which will provide the ability to make minor repairs even without knowing the recipe.

The light radius on torches and light sources were also increased. We did this for optimization reasons, because we’d like the game to run well. Brighter torches means fewer point lights, which in terms will help with framerate.

After the patch we released two hotfixes to correct some additional issues, like making sure that thrall recipes work properly, and removing an explosive jar duplication exploit.

Last week’s update didn’t do everything we set out to accomplish, so we’re doing another Xbox One stability patch this week. We’ve also added a secondary crash report system to the Xbox version, which will give us more detailed information about crashes and disconnects.

Getting parity between the PC and Xbox One is our next focus. There are a lot of fixes, which you can find in the patch notes from the PC version.

Every Friday, the entire development team meets up to discuss what they’ve been working on recently: New content and features, bugs that have been fixed, and things to come down the pipeline. The development team is split into cross professional Scrum teams that each have their own focus and tasks to complete. You can find their names and descriptions in the previous community letter.

The Vanguard have been stomping out bugs and exploits while also making some important changes to the game. As a part of the ongoing battle against “ghost-raiding” one of the team members has done some alterations to players’ interaction traces. This should make it impossible to interact with containers through walls.

There’s also a new system in place for sorting inventories, which will definitely be helpful when your inventory starts filling up with loot and recipes. The carousel update to the user interface is coming along as well. 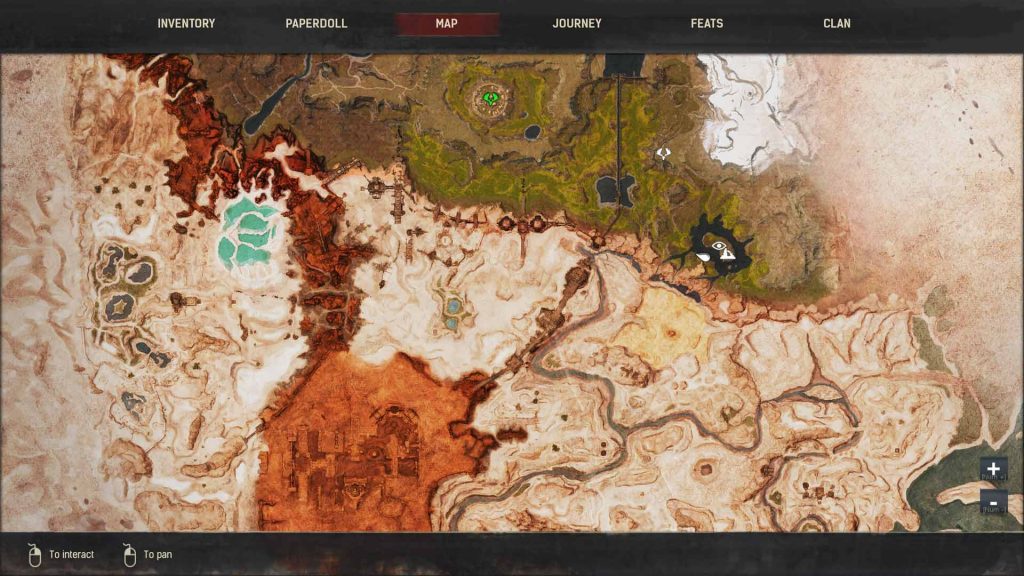 Finally, The Vanguard has made some changes to the way NPCs spawned in. This caused too many of them to spawn in at the same location at the same time, creating some weird chimera monsters. We now have a fix in place that we will push to live once we have all the kinks ironed out.

Work on the new dungeon and playfield area is progressing nicely. The Terraformers have been blocking out the areas and they’re now mostly playable (as in, we can run around in them), but there’s still work to be done before everything’s ready for prime time.

Finally, there are moon phases coming to Conan Exiles! This will allow us to create special events based on moon cycles and generally increase the sense that the Exiled Lands is a living, breathing place.

The Berserkers (Combat and movement)

The combat and movement team has a new name! From now on they’re The Berserkers. Our internal combat playtests continue. Combat work continues with new features, such as movement cancelling and new animations. In this community manager’s humble opinion, it’s looking pretty good.

In addition to this there’s also a lot of back-end work, new animations when gathering, and the character model now leans left and right when turning. These changes are subtle, but important for overall feel and polish.

Recently, Featurama has been working on a knockback and ragdolling system for combat. The physics for that was implemented in our development build last week. This is a part of what Joel has been talking about with taking inspiration from Dark Messiah of Might and Magic. It’s lead to some hilarious bugs, one of which you can see below.

Other than that, they’ve been busy fixing audio bugs and exploits, and working on the new Truncheons and Thrall bindings.

Featurama has started on some other new features, but we’re not allowed to talk about them just yet! Hopefully next week!

In an ongoing effort to improve game performance parts of the art team have been optimizing destructible building pieces, cutting down the number of polygons used in each building piece. Initially we were using an automatic solution built into the Unreal Engine, but that wasn’t particularly good for optimization. We’ve now “hand optimized” the building assets.

140 objects have been optimized, with an average 86% reduction in polygons. For things like the regular Stonebrick walls the difference isn’t huge: going down from 6736 triangles to 4747 triangles. The destructible mesh has seen significant optimization work, from 39.205 triangles to 6527 triangles. That’s a lot of triangles! 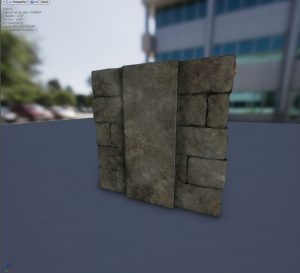 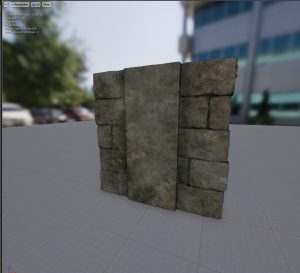 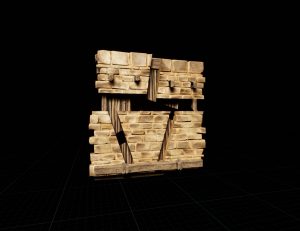 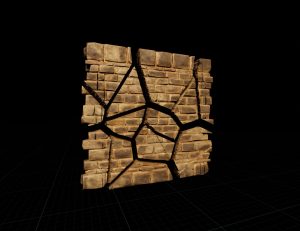 Together with the Terraformers, the art team has been blocking out the new dungeon and playfield areas, experimenting with different texture variants for rocks, vegetation and the surrounding environment.

Our animation team has continued to optimize creature animations for the new combat system. They’ve also been doing some tests on special combat event animations, to see if that’s something we can implement in the game later on.

Finally, the character artists have been finishing up the Zamorian outfit we showed you guys last week, while our creature artist has been pumping out new animals on an almost daily basis. There are even disgustingly adorable baby versions of some of those animals! 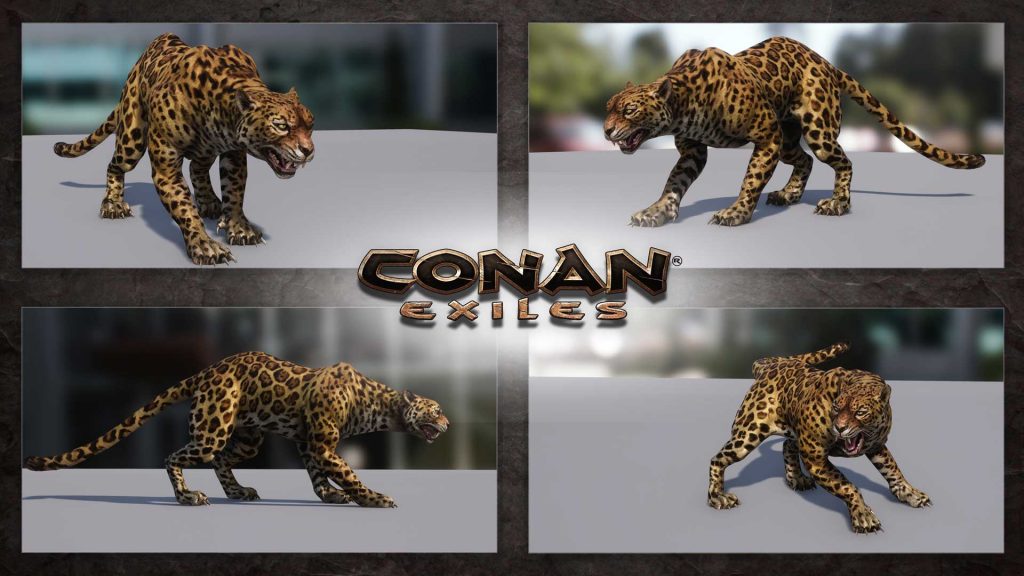 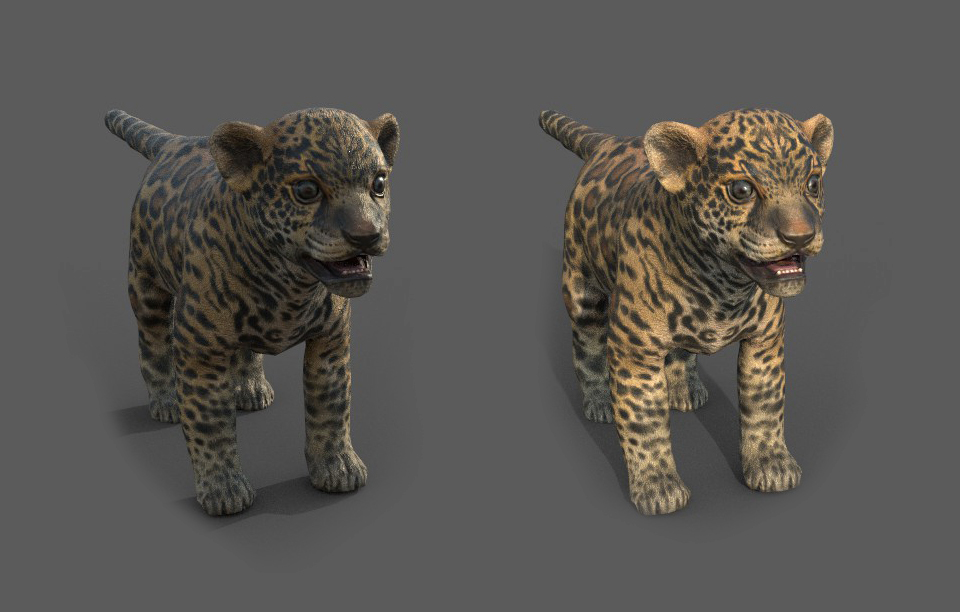 Tech, systems and coders (Client and server stability and performance)

Our crew of coders have been fixing crash bugs, doing some back-end work and improving the way the game loads in buildings. Anything immediately closer to you will be loaded in more quickly than before. This addresses an exploit where players could interact with containers through walls that hadn’t been fully loaded in.

The tools team has been optimizing the way we collect crash reports on Xbox, to more easily determine the cause of client crashes in the future. They’ve also been fixing server settings on Xbox so they’ll actually save properly now.

On the PS4 side of things, Coconut Lizard has been able to get the main menu of the game up and running on PS4. Pretty impressive for a week’s worth of porting work.

For those of you wondering about the bi-weekly dev streams we’re very happy to announce that the basic setup for the new streaming room is done. It’s a bit empty and bland at the moment, much like life itself, but it’s ready for streaming. We’ll announce our next dev stream very soon.